Today’s spider time was a bit abbreviated, because my day is jam-packed with stuff scheduled on top of stuff, so I only had a brief moment in the lab. I decided to tinker a bit with a camera lens I’ve been neglecting, the Laowa 25mm f2.8 Ultra Macro 2.5-5.0x. This is a strange little lens with a lot of potential, but I have struggled with it before. It’s just so different from my other lenses, with different properties, and I think I’ll have to invest some serious effort to master. Today was not that effort. I shot a few quick photos before I had to refocus on today’s classes.

Spiders are the ideal models for macrophotography, because the ones I have are so calm and stable. This little lady was practically immobile for the entire half hour I spent playing with lights and backgrounds and moving in close for pictures.

One thing I discovered is that the Laowa is surprisingly good at collecting light. My first photos were at f/2.8, an exposure of 1/500, and they were all washed out. I kept reducing the exposure and closing off the aperture, and still got usable photos. So it’s got that going for it. On the other hand, the depth of focus is still pretty shallow and I had to stick the lens right in the spider’s face to get it in view, and one thing I like in a lens is a forgiving working distance. Fortunately, this spider was imperturbable. 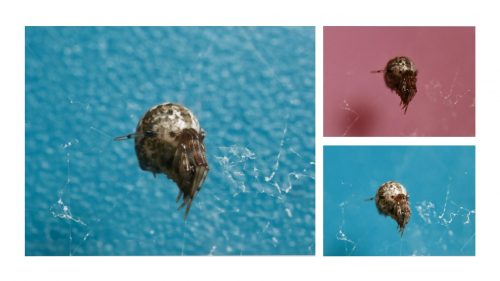 I have a mostly free day tomorrow! I’ll have to practice some more, and maybe do some comparisons with the Tokina Macro 100 F2.8 D, which is currently my favorite lens for field work. I don’t think the Laowa can replace it, but might make a good choice for the lab.

Now…on to classes and grading!

Slavering jaws! Venomous, needle-sharp fangs! Everything you love in a spider » « You call that a defense?