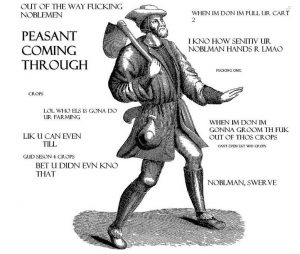 One of my worries, as I have benefited from choosing a career in the sciences as the world goes mad for practical educations, is that I see all the non-STEM fields being neglected by a capitalist perspective on universities. This is not good. Balance in all things, please, and we should support the entirety of knowledge, not just the bits that give us missiles and antibiotics (although, at the same time, I think students in non-STEM fields would benefit from a little more math and science — liberal arts educations are currently a bit asymmetric, with science students expected to broaden their horizons while the history majors get to ignore calculus and physics).

So here’s a historian taking the “STEM Bros” to task, entirely justifiably.

The last two decades have seen the rise of the Irritating STEM Bro.™ Two well-known examples are Neil deGrasse Tyson and Steven Pinker: Great Men from Important Science Backgrounds who blithely talk and write about the history of their topic as if they are expertly qualified polymaths. Both use the word ‘medieval’ pejoratively, and see the history of science as an inexorable, teleological march of progress from the fantastic Classical Period to the Terrible Medieval Dark Ages and then woo Renaissance! And then things gradually getting better and better until hurrah! We are enlightened and clever in the 21st century!

Quite simply, though, this is insulting, ahistorical nonsense. The problem, which Irritating STEM Bros™ don’t understand – or more likely don’t want to acknowledge – is that our modern categories of ‘science’, ‘religion’, and ‘magic’ do not map in any meaningful way onto the medieval period. So let’s first examine this problem of categories.

The whole thing is entertaining, but this bit made me laugh.

Psychologist Steven Pinker’s 2011 book The Better Angels of Our Nature: Why Violence Has Declined has as its central thesis the idea that violence has declined over time, and that we now live in the most peaceful era yet. This is, he tells us, due to five main developments: the monopolisation on the use of force by the judiciary stemming from the rise of the modern nation-state (as expressed in Thomas Hobbes’s Leviathan of the mid-17th century); commerce, feminisation, cosmopolitanism and the ‘escalator of reason’.

It’s this last factor, which is of most interest here, this ‘escalator of reason’ which says that we now apply ‘rationality’ to human affairs. This, Pinker tells us, means there’s less violence in modern society than there was because we’re more rational. And he’s not shy to use the Awful Irrational Medieval Dark Ages as a counterpoint to the Brilliant Post-Enlightenment Modern Times of Awesome.

Why laugh? Because I have eyes and ears and I live in 21st century United States of America, in a red county, in a town that is full of churches, and I can look around and see all the “rationality”. 40% think a greedy, incompetent grifter was a great president, and about the same number think God created the Earth in a literal 6 days. I suspect that your typical medieval peasant wouldn’t have been quite so delusional. Not that they wouldn’t have had their own follies, but sheesh — people are still people, and haven’t become noticeably more intelligent in the last thousand years.