One of my major problems with Christianity, a problem that has become increasingly vivid in recent years, is the cultish refusal to dissent from their own extremists — there’s an attitude of servile “getting along” with leaders who have become more and more deranged. We’ve been seeing that for years, with people like Pat Robertson and the Falwells and every one of those horrible organizations with “family” in the name, all certifiably hate-filled and determined to stamp out every deviation from their pale ignorant angry norm. It’s gotten so bad that the derangement has become the point, rather than the Christianity, so that the flock went ga-ga over a paranoid narcissist who has never exhibited the feeblest spark of religious devotion. Their new Jesus figure thinks he is the god and the Christians must lift every voice and sing his praises.

There have been many great Christian dissenters, people who believe in the religion with every fiber in their hearts, but who also see charity and reducing human suffering as the true great mission of Jesus Christ. I can disagree with their theology while respecting their goals and methods. Their priority is to be a good person and help others. Unfortunately, we don’t have a Cult of Jimmy Carter, but we do have a cult of Donald Trump.

We atheists have a similar responsibility. It’s not as if we’re somehow immune to the unreason and poison of the far right ideology. We should look at this and be appalled. 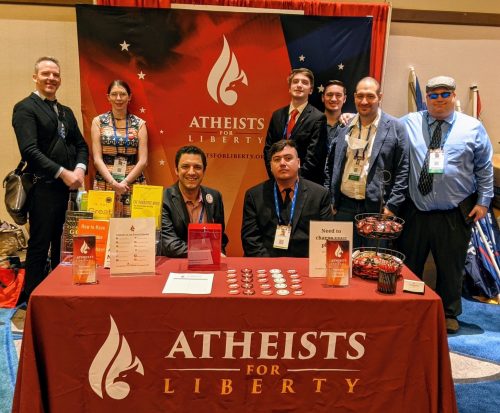 Yes, Atheists for Liberty were at CPAC to hobnob with fellow true believers in the anti-social justice cult which has captured US conservatism – and, to be fair, where better? CPAC is not a normal political conference, after all. In the range of acceptable, rational political opinion, it is not so much to one side of the scale as outside the scale entirely. CPAC brings together the vilest conspiracy theorists and hatemongers in the GOP and the conservative movement, and gives them a massive megaphone. It has consistently promoted false and harmful political ideas: this year it promoted the conspiracy theory that Trump won the presidential election, as well as transphobic and anti-immigrant rhetoric that wouldn’t be out of place at a neo-Nazi rally. It is a cesspool of the worst elements of American politics, and everyone who swims in that cesspool gets covered with slime.

A consistent theme of this year’s CPAC – as well as in conservative spaces more broadly – is the idea that social justice warriors are trying to “cancel” everything they disagree with. A great tide of illiberalism is washing over the USA, they claim, generated by angry Black Lives Matter and anti-fascist activists. Some of the biggest cheers of the evening were against “cancel culture”, something you’d think would be a boutique interest in the time of a massive global pandemic. But this seems to be what US conservatism has fixed on as its new bête noire, and Atheists for Liberty agrees.

This is an example of a new and growing phenomenon: the lines between religion and nonreligion, and even conservatism and liberalism, are becoming less important compared with the line between the “woke” and the “anti-woke.” Where you stand on the approach and concerns of contemporary social justice culture is becoming the signifier of political allegiance in the USA, and since Atheists for Liberty are anti-woke, they will happily dive into the CPAC cesspool.

I took a look in my archives, and I think I first started writing about the Deep Rifts in Atheism way back in 2009. I notice, though, that what I was saying back then was that we’d find our strength in the arguments over our goals, that internal dissent was the force that would drive us to be better atheists. I was so optimistic back then! Looking back over a dozen years, what I can see is that I was wrong (about so many things), and that there was no resolution, and that there could be no resolution. Atheism is a granfalloon. For those of you who aren’t great fans of Kurt Vonnegut (also an atheist and humanist!):

A granfalloon, in the fictional religion of Bokononism (created by Kurt Vonnegut in his 1963 novel Cat’s Cradle), is defined as a “false karass”. That is, it is a group of people who affect a shared identity or purpose, but whose mutual association is meaningless.

In that spirit, I repudiate “Atheists for Liberty” and all who find common cause with their opposition to justice. I will and always have criticized the atheist movement, and will not be one of the sheep who follow the worshippers of authoritarianism and prejudice and oppression into their hell on Earth.

Besides, look at that photo: smug assholes happily wallowing in the insanity of CPAC. How could anyone think that is behavior to admire or emulate?