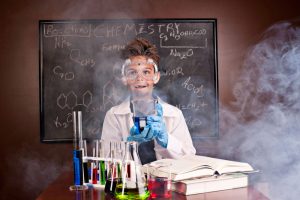 Remember what right-wing Christians mean when they talk about “academic freedom”. They really mean freedom from standards.

Here’s a letter from a Christian who is still indignant that the Institute for Creation Research was denied the right to hand out science degrees over ten years ago.

It is fitting to reflect and contemplate the future ramifications following events of significance. One such event transpired shortly after this author applied for admission to the Institute for Creation Research Graduate School (ICRGS). The school was established in 1981 with a unique purpose in providing graduate-level education in fields of science that are particularly relevant to the study of biblical apologetics. Its former graduates earned Master of Science degrees in Science Education, Astrophysics/ Geophysics, Biology, Geology, and General Science,1 and many are now teaching or participating in Christian ministries in various communities.

As a Christian educator, I felt that formal education from one of the world’s leading creation science ministries would serve me well as an important augmentation to the graduate degrees already earned from secular universities. However, only four days after my application was submitted, the board of directors of the Institute for Creation Research (ICR) voted to close the doors of the ICRGS indefinitely, effective 30 June 2010. The board reached this painful decision after a long legal battle with the Texas Higher Education Coordinating Board that ultimately resulted in a ruling against ICR and the end of this important educational institution.

He makes a long defense of the ICR, but somehow cannot say outright that the organization teaches as a conclusion that the Earth is less than ten thousand years old. This is a telling omission: their fundamental assumptions are so ridiculous that they dare not say them aloud, choosing instead to claim failings by real sciences that are not there. He cannot defend the process by which the ICR reaches their conclusions, and therefore tries to take them off the table. We’re going to play word games, instead.

For the ICRGS, the quality of education was never the issue, but rather the creation content within the curriculum. The THECB declared that the ICR Grad School program could not be called “science” because it was based on the creation model rather than evolution. To keep creation science and intelligent design out of the classroom, it is often argued that they do not qualify as science. Often the definitions used for such purposes are arbitrarily established to exclude other worldviews and frequently too stringent, also inadvertently ruling current or historic inquiry as unscientific.

The “creation model” is false. It doesn’t work. It was invented in the last century to paper over a primitive literalist interpretation of the Bible, and it’s so indefensible that the only thing he can do is claim real science is also false, therefore creationism has equal standing.

In the 1981 case of McLean vs Arkansas, the judgment defined the essential characteristics of science as being guided by natural law; explanatory by natural law; testable; tentative; and falsifiable. Anti-creationists have added additional requirements, such as Michael Ruse and Eugenie Scott who stated that science deals only with what is repeatable and can be subjected to testing. By such definitions archaeology does not qualify as science, since it is instead a search for intelligent agents rather than material causes. In a historical context, the hard sciences like physics or chemistry also cannot be reduced to these definitions. Much of the early developments of science were not guided by or explained by existing laws or known natural processes.

Archaeology is repeatable, testable, and makes hypotheses that can be criticized and evaluated. Ask an archaeologist! They have strong principles for evaluating evidence, and have arguments that are resolved by going back into the field and collecting empirical observations. That they recognized that intelligent agents, that is, human beings, are part of the process of historical change is not a criterion for rejecting the discipline as a science. Humans are real. They can be observed. We can see the consequences of their actions. So, studying them can be done scientifically.

My physics and chemistry friends are going to be surprised to learn that what they do doesn’t count as science, but going to church does.

That early science was built on guesswork and assumptions does not mean they were somehow unscientific. Our understanding was hammered out of chaos — people made hypotheses about nature, tested them, and re-evaluated their ideas until they conformed better and allowed better predictions about the natural world. Yes? That’s not a strike against science. It’s also the case that we don’t know exactly how life arose, so we make hypotheses about chemical possibilities, and go into the lab, or collect organisms from obscure places like deep sea vents, and test those ideas. That’s what science is!

These exclusionary definitions are especially problematic when we consider the many areas of science that attempt to explain one-time historical events, such as the big bang, the origin of life or biological processes. None of these hypothetical scenarios were observed, nor are they repeatable, allowing testing in any adequate manner. All attempts to reproduce the conditions that gave birth to the first cell have failed. In reality, such events fall well outside the statistical realm of possibilities and contrary to the known laws of science (2nd law of thermodynamics). Experiments in these areas of historical science are based on philosophically derived faith in unseen and unobservable processes.

He doesn’t understand the concept of repeatability, does he? No, we can’t fire off another Big Bang in the basement of the physics building. But we can study the properties of matter and energy and try to understand how they could have arisen. We can build colliders and see how tiny bits of matter interact. We can also observe consequences — the Big Bang theory didn’t arise out of some guy reading one sentence of a holy book and inflating it into a textbook worth of glurge. Instead, it was derived from seen and observed astronomical processes.

It’s telling that when their beliefs, based entirely on flawed interpretations of an extremely limited and internally contradictory text, are questioned, they choose to lash out and whine petulantly that physics, chemistry, biology, and archaeology aren’t real sciences, anyway. It’s kind of pathetic.

I’ll tell you what the ICR doesn’t qualify as science, and it’s simple. Are you free to question the accuracy of your source material? Do you get to revise your interpretation of the evidence to conform to the observable facts? Or are you required to hold certain tenets of faith?

All things in the universe were created and made by God in the six literal days of the creation week described in Genesis 1:1–2:3, and confirmed in Exodus 20:8-11. The creation record is factual, historical, and perspicuous; thus, all theories of origins or development that involve evolution in any form are false. All things that now exist are sustained and ordered by God’s providential care. However, a part of the spiritual creation, Satan and his angels, rebelled against God after the creation and are attempting to thwart His divine purposes in creation.

Case closed. Asserting your conclusion in the absence of evidence, and in defiance of any possible evidence, is anti-science.

Someone else shares my … taste? » « Tacky slime all over the place