“Venezuela!” is the reflexive argument of the right-wingers against socialism, so it’s not surprising that a cocky gang of American thugs would decide they could just swagger in and topple the Venezuelan government — 62 stupid mercenaries against a nation of 28 million people. They were so arrogant that the head of the mercenary organization (tell me again why we tolerate these assholes?) tweeted proudly at Donald Trump about it as the military operation began.

Why? The invasion was bonkers and criminal, why would you brag about it as your men were attempting an illegal coup against a foreign nation? The whole thing was unprofessional and incompetent, not to mention an unprovoked act of militarism. All the shrieking about “Socialism!” on the US right seems to have convinced the people behind this nonsense that the people of Venezuela would welcome them with parades, rose petals, and delirious declarations of “Democracy! Whiskey! Sexy!” in the same way they fantasized about the invasion of Iraq. Only they encountered something very different (but the same as they saw in Iraq).

“They came to Venezuela thinking the people would greet them like some kind of Rambos, with applause,” Maduro said on Wednesday. “But the Venezuelan people … captured them, tied them up, and the police had to intervene so there were no acts of violence against them.” 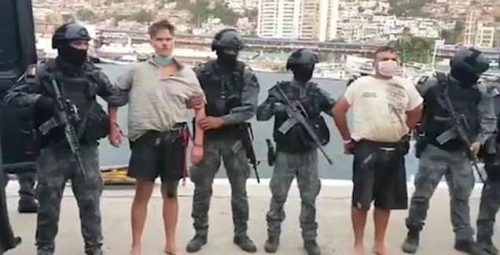 No sympathy for this gang of bumbling clowns

Maduro is not a good guy, just another authoritarian. But imagine if some other nation landed 60 mercenaries on the Potomac, intending to march on Washington DC and ‘liberate’ our country from the dictatorship of Trump. Some of us might think the general idea of arresting Trump is great, but would object to the extra-legal way it was being done, and would argue that this would do nothing to change the citizenry; others would harden in their attitudes and strengthen their support for our president, and it would push the whole country farther down the road to a dictatorship, even if it succeeded (which it wouldn’t). The whole operation was stupid and misguided and criminal.

Meanwhile, Joe Biden is trying to walk a tightrope, working hard to avoid saying anything harsh about the mercenary invasion.

The violence in Venezuela today against peaceful protesters is criminal. Maduro's regime is responsible for incredible suffering. The U.S. must stand with the National Assembly & Guaidó in their efforts to restore democracy through legitimate, internationally monitored elections.

Come on, Joe. No malarkey, remember? It’s not hard to flat-out condemn the idiots behind Silvercorp, rejecting this kind of flagrant anti-democratic militarism. That’s what we ought to be doing. Not saying the US should do everything in their power to ‘rescue’ that American jerks now imprisoned in Venezuela, but recognizing that they are dangerous, armed criminals who ought to be tried by the government of the country they tried to overthrow. You may not like Maduro, as I don’t much care for him, but there are legitimate, democratic ways to depose him, just as there are legitimate, democratic ways to depose Trump. I hope.

Interviewed by Democracy Now! early on Wednesday, economist and foreign policy expert Jeffrey Sachs, who directs the Center for Sustainable Development at Columbia University, and Professor Miguel Tinker Salas of Pomona College discussed what they both agree is the dangerous and counterproductive agenda that leaders like Trump, Bolten, Biden, and Pelosi are now pushing in Venezuela.

“What’s so stupid about these American policies, these neocon policies,” said Sachs, “is they do create disaster, but they don’t achieve even the political goals of these nasty people like Bolton. It’s not as if they’re effective and nasty; they’re completely ineffective and totally nasty at the same time.”

While acknowledging that Maduro has certainly made mistakes and legitimate criticisms of his government exist, Tinker Salas said the history of U.S. intervention in Latin America—not to mention elsewhere in the world— shows overthrowing governments in this manner “doesn’t produce the change that most people want. And what it does is it aggravates conditions for the majority of the population.”

Sachs—who last week released a detailed study along with economist Mark Weisbrot on the devastating impact that U.S.-imposed sanctions have had on the Venezuelan economy—added that people backing Guaidó and the coup effort are really just embracing “normal U.S. right-wing foreign policy, nothing different.”

Nothing new here. Attacking South and Central American nations with deniable squads of mercenary thugs has historically been the standard way the United States keeps those nations under control. It’s too bad we’re not going to be able to vote for a party in November that treats our brothers and sisters to the south as equals.

It’s just astounding to me that our politicians pussy-foot around a blatant disregard for international law so casually.

Can we petition to have everyone who says the word “god” punished? » « The ‘elites’ will be fine, the merely competent will suffer