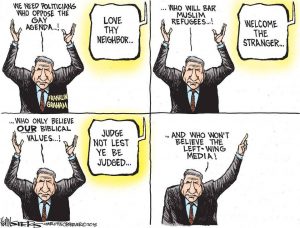 The US takes the lead, for now, because the UK just had to do something right. The American huckster and religious fraud, Franklin Graham, was booked to tour the UK with at least 7 planned venues. Now, though, every single venue has cancelled him, citing his anti-LGBT+ fanaticism and hate as the reason. Thumbs up for the UK!

As you might guess, Graham is now having a hissy fit, and as many American loons do, is threatening to sue.

A spokesperson told right-wing Christian outlet CBN: “Since the original venues have broken our legal contract with them, we are pursuing appropriate actions based on grounds of religious discrimination and freedom of speech.

“The Gospel always faces opposition, so we will prayerfully and boldly continue to press forward so that the Good News of God’s love and forgiveness will be proclaimed in all of the cities we have planned to visit.”

This is a guy who has preached that the gays are the enemy and should be kicked out of schools and churches, so I think God’s love is a lie. He also seems to agree that we should be selective in who we allow into our institutions, which rather defeats his case.

I think he is welcome to run his crusade with a UK tour of church basements, prayerfully.

Oh…Goop Lab is on Netflix » « What do you do when the law doesn’t work?