Tom Chivers has dipped a tentative, timid toe into the arguments about trans issues to declare that of course biological sex exists, a statement I find utterly baffling. “Biological” sex? Is there some other kind? I look forward to hearing stories about abiological sex, or artificial sex, or machine sex. It’s very silly — next thing you know, the TERFs are going to start ranting about an equally silly term like “biological woman”, as if the non-biological women are running around made of plastic and aluminum. Uh-oh, I guess they already are. That’s another one I don’t get. Are they just sticking “biological” onto terms that they want to dignify with a sciencey label, contrary to what actual biologists say?

I’m still trying to wrap my head around “biological sex”. Is non-biological sex what you get when you stuff a Hitachi magic wand into a Fleshlight? Biology doesn’t have much to do with that.

Anyway, what triggered Timid Tom was a comment by a British politician, Jo Swinson (sorry, I’m American, I know nothing about politicians in the UK):

Swinson, on Radio 4’s Today programme, was asked by Justin Webb whether she believes that “biological sex exists”. She replied: “Not on a binary, from what I’ve read. I’m not going to pretend that I’m an expert in the subject but I don’t think that things are as binary as are often presented.”

That’s about as coherent and sensible a response as you can make to a silly question. She’s not going to pretend to be an expert, but she translates an absurdity into something as close to reality as she can, and answers that. She is correct. Sex is not binary. It’s a complicated mess of a subject with all kinds of variations.

Tentative Tom disagrees. He waffles about with a comparison to Pluto? Which used to be a planet? But “planet” was redefined so it isn’t anymore? Which he uses to somehow make an argument that objects in space are either planets or not-planets, a true binary, as long as you use the Correct Definition™, and that the fact that some objects are ambiguous does not affect the fact that Jupiter really is a planet.

I don’t see how arguing that there are artificial definitions that partition a continuum of object sizes supports his claim of unambiguous definitive binary states, but this is apparently Tom being Tom.

Then he launches into a discuss of intersex individuals, conceding that there are human intermediates in sexual differentiation.

With sex, just as with the concepts of “planet” or “species”, there do exist ambiguous cases. The intermediate cases in human sex are usually known as “intersex” people. There are various ways in which one can be intersex: the Intersex Society of North America (ISNA)’s FAQ site mentions genital ambiguity, such as girls with very large clitorises or boys with very small penises, or scrotums that have divided to form labia-like structures; external genitals that appear female, but with male-typical anatomy inside; chromosomal abnormalities, such as mosaicism, when some cells are XX and others XY, or having three sex chromosomes such as XXY; or having standard male XY chromosomes but a body that is insensitive to the androgenic hormones such as testosterone, which tell the embryo to start becoming male.

You’re losing me, Tom. These are all people exhibiting variation in sex-related traits. Are you trying to argue that these do not demonstrate that sex is nonbinary? They seem to me to show a clear range in the phenomena.

But then he says something that makes all clear. He doesn’t understand the difference between bimodal and binary distributions! Something can exhibit a bimodal distribution yet not be binary, so telling me that a phenomenon is bimodal does not imply that it’s binary.

…that doesn’t mean that sex doesn’t exist “on a binary”. If you did a graph, plotting human beings by height, you will see two clear peaks on that graph — average male height and average female height. If you plot weight, it would be even clearer. Foot size, hip-to-waist ratio. There would be significant overlap between men and women, but there would be very clear differences.

That’s a really good example. You’ve probably seen that kind of curves plotted to illustrate the differences in height of the different sexes. The trick is that they usually segregate the data into two categories first, and then plot two curves. Oh, look: two peaks! 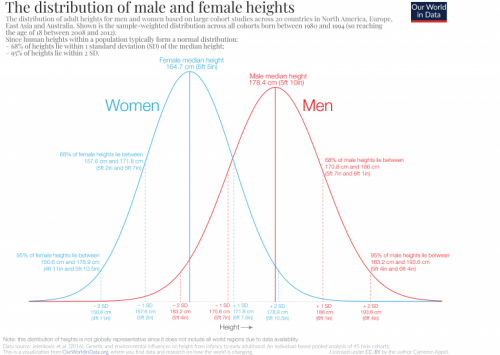 Except for one little problem. He says if you “plot human beings by height”, then you will see “two clear peaks.” Let’s try that, without first biasing the interpretation. 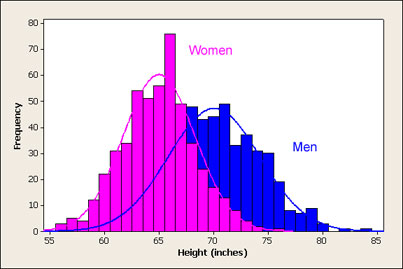 Ooops, without the color coding, that looks like a bit of a smear; maybe with the right statistical analysis, you could extract a bimodal distribution out of that, but it would be pretty much impossible to turn that into a binary distribution.

Other small problems with these data is that height varies in history and geographic location. The average height of men 150 years ago was equivalent to the average height of women today; South Asian men tend to be shorter than American women. Were all those workers in the industrial revolution women, as are the majority of people in South Asia? Belgians are significantly taller than the French…are they more manly?

This is not to claim that biological differences are non-existent — individual traits do vary significantly between sexes. Even height! This kind of growth curve is really interesting. 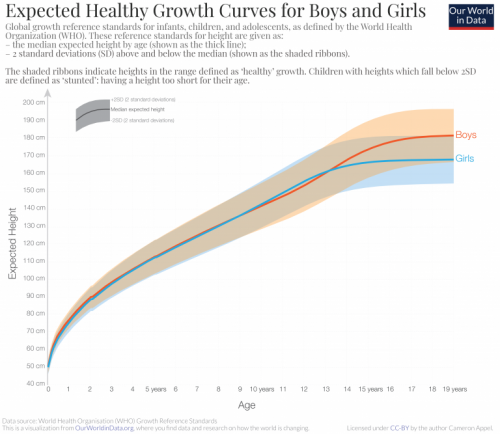 It’s almost as if exposure to differing hormone concentrations at puberty elicits a differing pattern of growth, an observation that isn’t at all surprising to all those biologists who will tell you that there is a spectrum of variation that tends to be biased by sex, but still insist that sex is not binary.

But you still wouldn’t argue that a solution to the terrible transgender bathroom problem is that all you have to do is put a stick across the restroom door 170cm from the floor with a sign that says “You must be shorter than this to enter”. That wouldn’t work at all. My wife would have to use the men’s room, and Tom Cruise would have to use the ladies’. So why is Tom Chivers using this argument?

I think Timorous Tom is well aware that this won’t work, so he unslings a fresh battery of “facts.”

And those are not really sexual characteristics. If you were to plot, say, volume of mammary tissue, or number of ovaries, or number of sperm cells produced, you would see a far, far clearer picture of two enormous spikes with almost no overlap at all. Sex is about as binary as any biological or natural classification gets. It’s certainly a lot more binary than planetary status, and we’re happy to teach kids that Mercury is a planet but Pluto isn’t. There is a twilight, but it’s tiny compared to the size of day and night.

Whoa. I think if you plotted the volume of mammary tissue it most definitely produce a non-binary distribution within women and within men, and there would be overlap. You wouldn’t see two enormous spikes, you’d see two rounded mounds, which would remind me of something, I can’t quite think what. Similarly, if you plotted sperm counts, there’d be a broad distribution, admittedly floored at near zero for many women and some men, so there’d be a strong, tall rod at 0 and a rounded hemisphere subsequently. But again, it’s a poor way to distinguish men and women. I can’t quite see the bathroom police cupping breasts or getting a sperm sample before allowing you to enter.

It also brings up another problem: there are so darned many traits with differential expression. Trembling Tom brings them up one at a time to try to make the case that everything is binary, and he’s failing at even that, but what about the combos? A person is short, has large breasts, a Y chromosome, and a sperm count of 0; man or woman? Another person is tall, is flat-chested, had a hysterectomy, and identifies as a woman; will you tell her no? We don’t just have a graded distribution, we have combinatorial variation.

Oh, and he also trots out that familiar excuse, that it’s a tiny minority. So what? You don’t get to ignore their existence, and they still wreck your imaginary binary distribution.

But wait, one more absurdity from poor Torn Tom.

Male suspects in domestic homicides outnumbered female ones by more than seven to one in England and Wales from 2016 to 2018. Men — male-bodied people — are simply much more violent than women, and it’s silly to pretend otherwise.

No one is pretending otherwise, it’s a disgraceful statistic. But why? That’s a real concern — is it something about masculine nature, or is it something about masculine roles in our society? Also, is it binary? Are all males violent, and all women passive victims? Tom — honest question here, I’m just trying to discern your sex — how often do you beat your wife? If the majority of men are not violent, doesn’t this make violence a poor criterion? We’re only going to allow you to use this public restroom if you present a copy of your arrest record for domestic violence.

It should also go without saying that transgender women are by far the victims of violence. I guess that makes them Biological Women™ by definition, then. 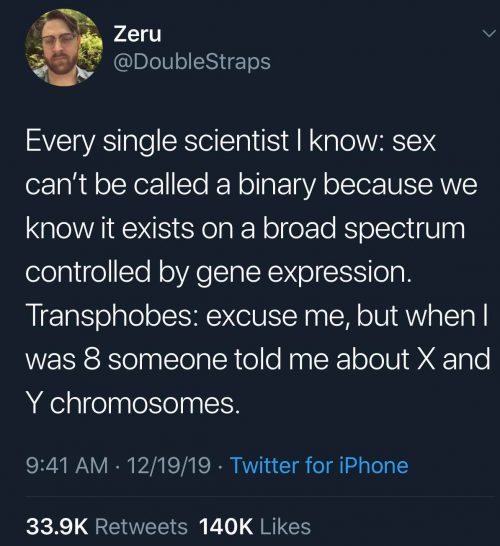 Rest in peace, Mr Studly » « I hope they’ve put their best detective on the case!