Oh no. Even warm cozy Earth isn’t safe from the nihilism of the void. Here’s a story about parasitic wasps that lay their eggs on spiders. It’s another horrible tale of zombie arthropods, their endocrine system hijacked by wasp larvae to force them to build a nice silken web to house the wasp. 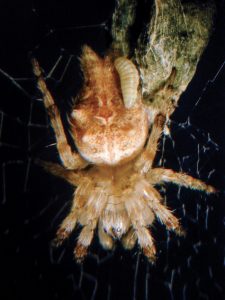 After the web is spun, the nearly mature wasp overlord injects the spider with poison, finally killing it. But in terms of free will, Eberhard says, the spider has been dead all along.

“Once the spider has been stung by the female wasp, it’s effectively reproductively dead,” Eberhard tells Newscripts. “It’s maybe going to live for another couple of weeks, but it now has that egg on it, and later the larva, and so it’s done for.”

Unfortunately for the spider, it doesn’t end with death. After killing the spider, the newly hatched wasp regurgitates digestive fluid onto the host body and sucks out its insides for nutrients. Dracula, surely, would be proud.

We live in a dark universe, obviously.