It’s feeling chilly here in Minnesota this morning. Then I realized it could be worse — I could be adrift in a soulless, nearly empty void, sensing a sharp drop in the frequency of encountering rare particles in the vacuum as I crossed a boundary into interstellar space. Yeah, I was just reading about Voyager 2 leaving the heliosphere.

From beyond the heliosphere, the signal from Voyager 2 is still beaming back, taking more than 16 hours to reach Earth. Its 22.4-watt transmitter has a power equivalent to a fridge light, which is more than a billion billion times dimmer by the time it reaches Earth and is picked up by Nasa’s largest antenna, a 70-metre dish.

It’s traveling at 55,000 km/hour, it’s been zooming out there for about 42 years, and it’s only 16 light-hours from Earth? That puts those silly SF novels in their place. 8,760 light-hours in a single light-year…Voyager has barely started out.

The two Voyager probes, powered by steadily decaying plutonium, are projected to drop below critical energy levels in the mid-2020s. But they will continue on their trajectories long after they fall silent. “The two Voyagers will outlast Earth,” said Kurth. “They’re in their own orbits around the galaxy for 5bn years or longer. And the probability of them running into anything is almost zero.”

Maybe…maybe I should just crawl back into bed and snuggle up under the covers. It’s warm in there, and I’ve only got a little while. 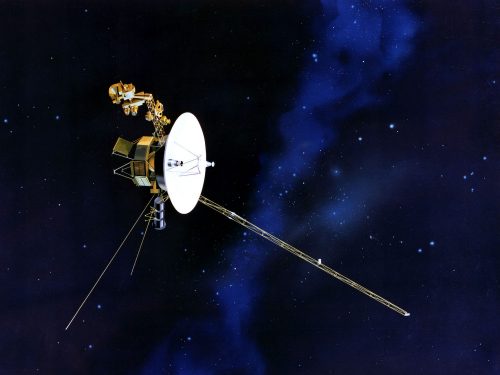 No respite from the gloom. Must be winter for sure. » « Train people are definitely strange