Matt Baish is a terrible person. 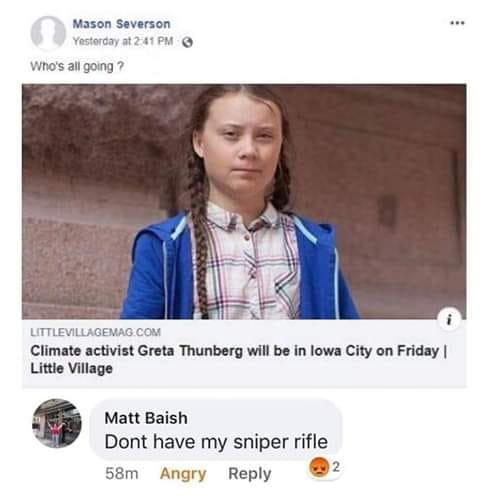 He’s “angry” about Greta Thunberg visiting his area, so he “jokes” about not having a sniper rifle. Funny. Hilarious. Except that it’s sad how going right-wing causes atrophy of one’s sense of humor.

Fortunately, he’s been placed on administrative leave, so he won’t be poisoning students’ minds. This still disturbs me:

Baish, who is listed as a science teacher on the Waterloo West High School’s website, was placed on administrative leave after responding to a Facebook post about Thunberg visiting Iowa City this week, a local ABC affiliate reported.

Thunberg’s reputation rests on her fierce support for taking action against climate change; she spoke to congress and told them to listen to the scientists. This bozo so strongly hates that message that he’d make veiled threats against her? How can he be teaching good science?

#SpiderSunday: Welcome Cliodhna to the colony » « #Arachtober: The #Spider Swarm!