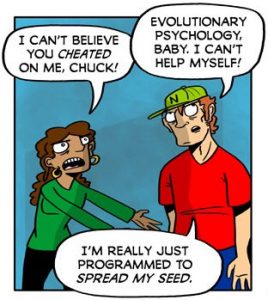 Well, some old white men, anyway. Jeffrey Epstein loved evolutionary psychology because it was used to justify rapey behavior and abuse of women — it’s good for the species, don’t you know, rich abusers wouldn’t exist if they didn’t have an adaptive advantage. So Epstein threw money at helpful apologists like Robert Trivers and Martin Nowak (boy, did he throw a lot of money at him), and they obliged by rationalizing the worst activities of men. Meanwhile, other hangers-on who did not even like, let alone get paid by him, were still well-pleased by the chauvinism of EP, and heaped praise upon it without even requiring any quid pro quo. I don’t know which is worse.

Pinker is a talented popularizer of science and authored several books on language which were generally well received. He has attracted controversy, however, for engaging with popular debates on evolutionary psychology’s more sweeping claims in the 1990s. His 2002 book The Blank Slate is a sustained attack on those academics, intellectuals, and feminists who weight nurture more heavily than nature in the development of human behavior. While defending the book A Natural History of Rape, whose authors Craig Palmer and Randy Thornhill (a Trivers coauthor on the Jamaican symmetry work) helpfully advise women to wear modest clothing to prevent assaults, Pinker describes typical rapists as “losers and nobodies,” “outcasts,” or perhaps “ethnic rioters.” The billionaire science enthusiast is not included in Pinker’s rapist typology.

Heh, yeah — The Blank Slate is the terrible piece of crap that totally soured me on Pinker. It’s a dishonest polemic contrived to advance a dead perspective by pretending it was obviously true while taking malicious swipes at everyone who had a more nuanced, sophisticated view of the interplay between genes and behavior. I am not surprised that he became a proponent of evolutionary psychology, which was just more of the same old ignorant adaptationist garbage. When I compare the careers of two Harvard professors, Gould and Pinker, one of whom wrote two great books, The Mismeasure of Man and Ontogeny and Phylogeny, and a multitude of essays revealing his fundamental humanism, and the other of whom is a darling of modern racists and rapists, I have to think that the wrong one died early.

There is one thing to do now.

Epstein is dead, and now beyond the reaches of human justice, but it is still possible to hold his enablers and scientific sycophants to account. It is necessary, but not enough, to demand that individuals like Trivers and Nowak and institutions like Harvard and MIT return the millions they received from Epstein. The ideas produced by these scientists also matter. Evolutionary psychologists have naturalized, and even at times excused, male sexual violence, but evolutionary biology is not the sole province of reactionary white men. Those of us working in this field must push back on both the corrupt funding system at elite institutions and flawed ideas these institutions have produced.

If your beliefs require propping up with large amounts of cash from self-serving rich people, then maybe they deserve to be starved for a while. It should cost you credibility to be a recipient of donations from evil men: give the money back, let’s see if your ideas can stand on their own without the support of corrupt processes.