So I took these Steatoda triangulosa embryos that emerged from their egg sac yesterday, and I sat down at my microscope and configured my camera to a useful and consistent setting (with a little tinkering, I found I could get decent photos at f/4, 1/80th of a second, ISO 3200 (!), at 64x on my Wild dissecting scope), lined up the containers with the spiderlings next to me, and thought I’d just march through and snap photos of the dorsal surface of the abdomen. Then I’d repeat this procedure every couple of days, and at the end of it all I’d have photographic series of pigmentation changes over time in a developing set of spiders. Simple! Except…reality intrudes.

First problem: spiderlings don’t sit still. They’ve got busy lives to lead, and because this is a longitudinal study, I can’t just kill them to make them stop movie (also, I’ve got this weird thing where I dislike killing animals). This is why I’ve got short exposures, too, because anything longer produces nothing but a blur.

Second problem: I’m trying to do three things at once, but I only have two arms. I’m moving the specimen container in the focal plane to follow the spiderling, I’m adjusting the focus to follow them in the vertical plane, and then I’ve got to click the shutter button at some point. That’s three. I’ve got a remote trigger, but it has to be aimed at a sensor on the camera, which meant it was kind of useless. I’m thinking of two possible solutions: a camera trigger I can activate with my mouth, or getting an additional limb grafted on. The latter is most appealing, former might be more practical.

Just to give you a taste, this is what a few seconds of my photo stream looks like when I’m done.

Third problem: That wide-open aperture means I get enough light, but the plane of focus is really narrow. What with all the running around, I’m really lucky if I get the plane of interest, which is the dorsal cuticle, in good focus. So I take lots of photos. It’s pure chance when I get the abdomen in the field of view, focused on the right surface. I’m going to have to compromise on the camera settings, I think.

Fourth problem: They’re only two days post-emergence, but they’re spiders! They’ve already filled their containers with crazy web lines running everywhere. When I’m lucky, they’re scurrying along the surface of their container, and I can sort of predict where they’ll be over a short period of time, but then suddenly they launch themselves upward, downward, at some cockamamie angle. Three dimensional travel over time is a pain. It also means they have no regard for your conventional orientations, so you may want to take a well-defined image from above looking down on their dorsal surface, but often these spiders are more comfortable upside down, or canted in some weird perspective. Those annoying photos above? Doubly annoying because that spider was constantly inverted, so you’re seeing the ventral side.

It was all far more difficult than I expected, but I should have known. This is how science always goes. You struggle endlessly to get stuff to work, you flail about tinkering and trying to develop the necessary skills, and then after you do it a hundred times, you might find it becomes routine and you can start gathering lots of data. You hope. And then sometimes you get preliminary data that tells you to rethink everything. 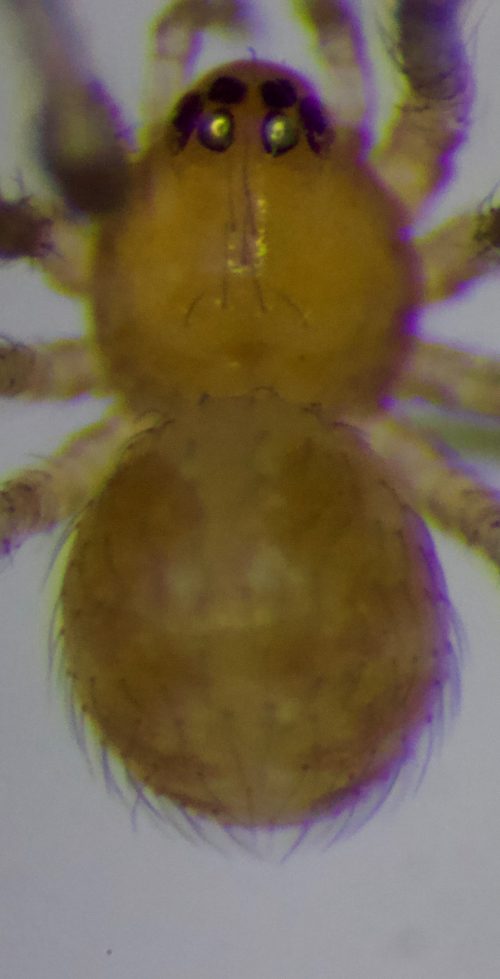 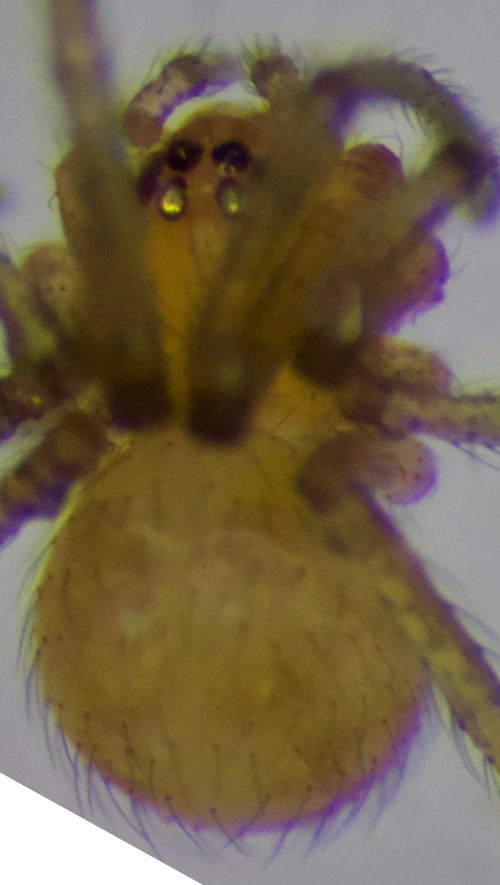 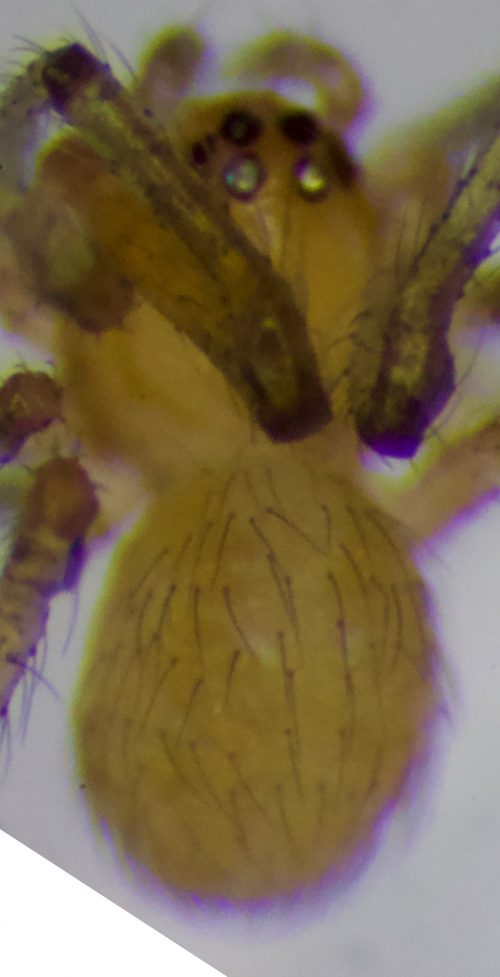 In particular, look at the first abdomen at the top. This animal is just 2 days from leaving the egg sac, and you can already see the zig-zaggy S. triangulosa pattern in the abdomen, lightly. I’m too late to catch the emergence of the initial pigment pattern! I can still try to watch it progress and darken in the juvenile, but I’d really hoped to catch the pre-pattern gradually swimming into view.

That just means, though, that this is a different problem requiring a different protocol. I’m going to have to extract embryos from the egg sac earlier, and culture them in halocarbon oil while observing them on the microscope. The good news about that is that I’ll have to work on them before they’re capable of movement. Which is good, because I was ready to slap a spooder silly to stop them from scuttling about this morning.