So how intolerable do you think a Nazi church service would be? 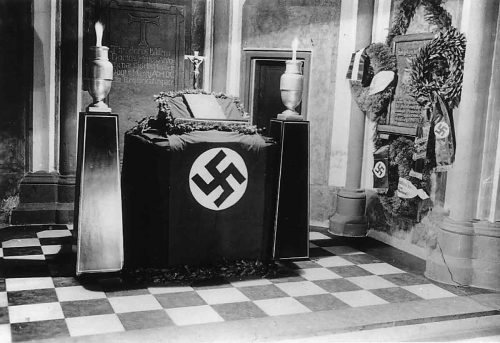 In contrast to the post-war myth-making that tried to paint the Nazis as pagans and atheists, Stephen Waldron points out that instead, Nazi Germany was soaking in Christianity, and that the Nazis themselves were fanatically devout, seeing religion as an obliging tool to gain support for an agenda that was anti-semitic, anti-feminist, and anti-intellectual.

Although Hitler was not very pious, the 97% of Germans who identified as Christian mostly convinced themselves that he was. [Sound familiar? –pzm]

Most Protestant Christians at the time were ecstatic at the creation of a newly Nazified world. And they went to church.

This new world demanded a renewed church with reinvented liturgies. In the midst of a fierce struggle for control of the churches, the pro-Nazi “German Christian” faction preached sermons, edited Bibles, revised hymn-books, altered liturgies, and changed the church calendar.

The whole thing is terribly familiar. Every aspect of this story reminds us that fascism was something imposed from above by a strong leader, but bubbled up from the inclinations of the citizenry, often tied to religious beliefs in their superiority over others. It’s happening here, right now.

What can we do with the knowledge that Nazi church services were public, masculine, anti-intellectual, anti-Jewish, and nationalist?

Especially in the U.S., we can let go of the idea that the real danger is that fascism could happen. Fascism can happen in everyday life without government control or a dictatorship, and it’s not any better because it isn’t full-blown.

The fact that Nazis were able to recycle already-existing aspects of church services in the service of their ideology should disturb us all. We can already find U.S. flags at church altars, desperate attempts to make church more masculine, and anti-Jewish readings of New Testament texts. That’s bad enough.

We might get rid of Trump, eventually, and we’re lucky that he’s an incompetent boob…but we’re still going to have to do something about the christofascist churches and the right-wing thugs who cloak themselves in the new holy trinity of God, guns, and capitalism.