A poll has determined where to find the good life, state by state. Do you live in a madly grinning state, or a kind of glum state? 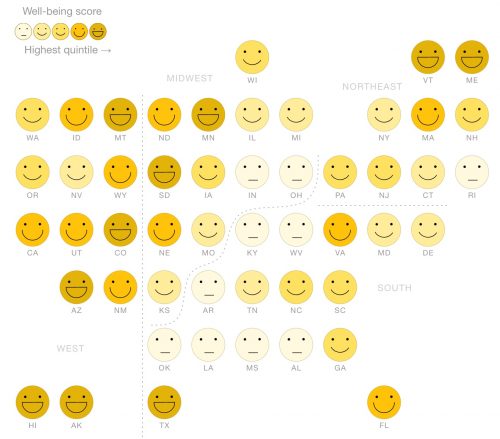 How nice, I thought, I live in Minnesota, where we’re very pleased with ourselves. But then I noticed that Texas is also pretty smug, and how could anyone bear to live there?

These results are from a self-assessment poll, which means it probably utterly meaningless. It’s kind of telling that there is a great band running up the center of the country, the Miserable Middle, but I don’t know what it’s telling me. Midwesterners are realistic? They’re mostly self-effacing and modest? Life really sucks in Ohio? Or maybe some of the Trump states are feeling kind of embarrassed?