The self-destruct sequence for Scienceblogs has begun. If you head over there on this last day of existence, you’ll find that the last post on most of the blogs is an announcement that they’ve jumped into their escape pods and are jetting off to new worlds of discovery.

It’s a shame. Scienceblogs really was revolutionary in its time — the idea was to bring in all these people who were writing about science as a hobby, give them a little profit from their work, and harness them to generate lots of continuous online content as part of a larger science communication strategy by Seed Media. It worked! Sorta. Unfortunately, the blog network was about the only part of the media empire that was running in the black, and the big projects — Seed magazine, a popular science glossy, and ideas about data visualization — didn’t last. And then online ad revenue started to get ugly (and still is!) as the ad companies cannibalized their readership with increasingly aggressive and off-putting ads (see freethoughtblogs now for example). Management tried to make it work with a few terrible missteps, like selling a blog to Pepsi, blurring the lines between commercialism and science content. But otherwise, it was a great, fun, contentious, interesting community.

The beginning of the end came when National Geographic bought up the network. It was clear in discussions with the new management that they had no idea what they’d bought — their concerns were all about bottling it up and constraining the beast by imposing conservative standards and practices on a diverse collection of independent bloggers. People started to leave. It didn’t help that one of their first acts was upgrading everyone to new software, botching the process (I lost about a third of my comments) and leaving us with rather drab, vanilla-ish appearances. And then neglecting everything. It was clear that they didn’t care, there were caretakers put in place to just reign over the decay, and there was to be no improvement, no growth, no excitement. So many of us drifted away.

And today is the day they nuke it from orbit.

One last fond look backwards at the main Sb page… 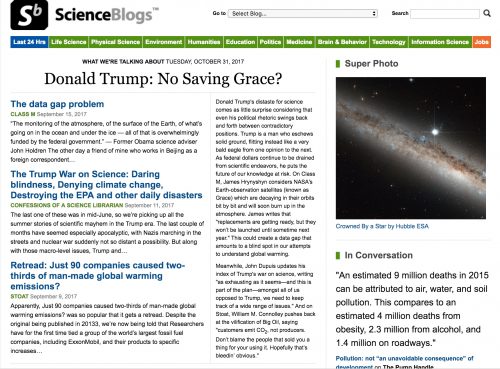 Gosh, I sure hope no hostile alien life forms have smuggled themselves aboard the escape pods.

Weapon of choice? » « Another attempt to divorce atheism from the asswaffles