A few days ago, I had a couple of exchanges with a well-known and well-regarded YouTube atheist who recited a set of familiar tropes. I’ve blurred out their identity below, despite that being against all of my instincts (you say stuff, own it) because Stephanie Zvan also commented on it, and she’s being courteous. But damn, I’ve been hearing this demand for politeness for over a decade now, and it’s getting old. 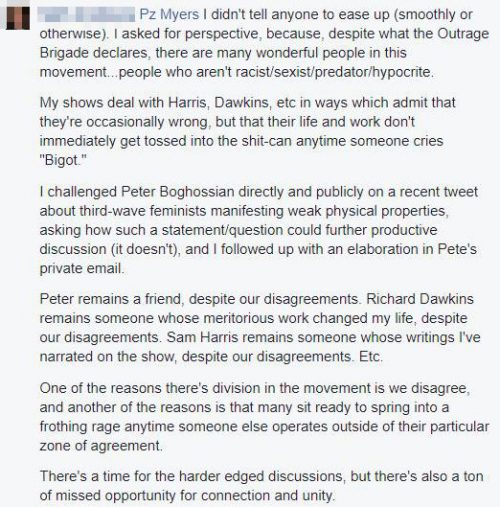 Here’s the deal: we are supposed to be civil, polite, and supportive of people in the atheist movement, no matter what they say, in the name of “unity”. If we disagree publicly, we are characterized as “the Outrage Brigade” and slandered with hyperbole, while being accused of slandering people with hyperbole. I have, for instance, a great deal of respect for Dawkins’ work and talents as a science communicator, and I also like him personally, but if I disagree with some of his comments, I’m told that I’ve tossed their entire life and work into the shit-can. This is not true, although the defenders of the status quo think it is — that any challenge to any aspect of a Great Leader’s opinions is a black-and-white demonization of everything they’ve ever said.

Great timing. Thanks for making my point for me. By the way, what do we deserve? Trump?

It’s very nice that he can remain a friend with Peter Boghossian on some personal level. He’s still a terrible person with some very bad ideas. I am not persuaded to appreciate those very bad ideas because Blurred-Out-Atheist thinks they’re a peachy person. I’m not going to sing kumbaya with someone who’s endorsing regressive, hateful ideas because Blurred-Out-Atheist has waved them away as mere “disagreements” and is willing to say so in private email to his pals.

I pointed out the irony of telling some peole to be nicer in the name of unity while also labeling them an “Outrage Brigade” and accusing them of “springing into a frothing rage” over relatively minor disagreements. But mostly I backed away.

See? Not springing into frothing rage. I filed it away and said to myself that I’ll cool off for a few days and see if this guy will see the light of reason.

Nope. He posted this.

This is the difference between respectful, strong, mature, nuanced criticisms, and the inflammatory wailings of the Outrage Brigade…those already in a froth before they’ve bothered to read/watch/listen to the issues – ANY issues – at hand. They lash out in memes. They inflate every thought with hyperbole. They apparently have anointed themselves as some kind of mind-reading Idea Police. And any honest person who has ever used the internet knows they exist.

Are they the agents of good faith, charitable listening, genuine understanding, dialogue, problem-solving, building something better? I suspect not, because they throw gasoline upon every spark, pour salt on every wound, and usually take a flailing machete to the arenas for careful surgery.

Harris deserves criticism and the rebuttals of better ideas. Anyone who declares that someone can’t appreciate his writings, activism, etc while also having points of disagreement is an acting demonstration of the very thing which makes online exchanges so maddening, so ugly, so unproductive.

It’s even worse. Much worse. He has decided that many of the people who criticize Dawkins, Harris, Boghossian, etc. are lunatics with flailing machetes. He has lost all sense of perspective. Look at that: while I was off taking deep breaths and restraining myself, he was busy anointing himself as some kind of mind-reading Idea Police, and decided to compose this respectful, strong, mature, nuanced criticism that doubles down on the Outrage Brigade, accuses them of inflammatory wailings and of throwing gasoline upon every spark, and engaging in needless outrage.

Well, fuck that. If you can live in Trump’s America and deny the existence of needful outrage, if you think that writing great science books makes your social commentary unimpeachable, if all it takes is being a philosophy professor to make your ideas about gender studies bulletproof, if you think writing books that demonize Muslims makes you an unquestionably great scholar, if you think you get to decide which ideas are less important and deserve to be insulated from a righteous anger which you are going to label “needless”, if you’re going to be outraged about divisiveness while declaring that people who criticize Dear Leader are the goats to be separated from the sheep, then hell yes I will tell you to go stuff yourself up your own reverent ass. I can’t help but notice who you choose to consider friends despite their terrible ideas and who you consider enemies of the movement because of their social justice ideas. It tells me what ideas you’re willing to support, and which you oppose.

And those ideas matter. The atheist movement, I’m told, is all about ideas — ideas that can change the world. But as is always the case, there are always more people who adapt to a movement, find themselves comfortable with it, and resist all efforts to change anything ever again. Unfortunately, we live in what can only be described as a dystopian society, and any complaining about change and upheaval and revolution will be seen as favoring the status quo.

A Very Smart Brotha wrote recently about this problem. Preach it, Damon Young.

Polite white people—specifically, polite white people who call for decorum instead of disruption when attempting to battle and defeat bias and hate—aren’t as paradoxical as tits on a bull. But they’re just as useless. They provide no value, they move no needles, they carry no weight (metaphysically and literally) and they ultimately just get in the way. They’re humanity’s tourists: the 54-mile-per-hour drivers in the left lane refusing to get the fuck out of the way so others can pass. And if you get enough of them in one place, they cause accidents.

Unfortunately, they’re every-fucking-where. They’re on Facebook threads and sitting behind you at work. They’re your neighbors and (sometimes) your family members. They’re Academy Award-nominated actresses on Twitter and college professors named “Mark Lilla” peddling terribly premised books about identity politics. Sometimes they ask for level heads, lest we become what we’re fighting against. Which is like saying, “Hey, don’t kill that fly, man, because you’re going to turn into a fly.” Sometimes they misquote MLK. Or Gandhi. Or Mother Teresa. Or Papa fucking Smurf. But you can always find them somewhere, attempting to defeat violence with the devil’s advocacy and danishes.

Of course, these are not bad people. At least not Martin Shkreli bad. They’re just so goddamn inert, and that inertia is dangerous. It’s unwise to mistake their lack of movement with futility. Because this type of idling does make a difference. Just the wrong kind of difference. It can be seductive and sublime. Who doesn’t want to believe that love bombs are enough to devastate hate? Who wouldn’t want to know that good manners win if the manners are good enough? Think about how much less stress battling white supremacy and police brutality would induce if all you needed to do to defeat it was drink a bottle of Pepsi.

Ultimately, this laser focus on niceness and decorum is just a way of policing behavior. Politeness in the face of violence, and terror is a privilege exclusive to them. They just don’t have as much to lose if everyone stays polite and kind and sober. If things happen to change while we’re nice as fuck to each other, great! If not, well, great, too. It’ll still be Wednesday. And bulls still won’t have tits.

They’re also YouTube atheists with “Atheist” in their nom-de-vlog who love engaging and making friends with regressive assholes while dismissing those who support social justice as the Outrage Brigade. If you aren’t outraged right now, you’re doing everything wrong.

Council on Biblical Manhood and Womanhood? Jebus, just from the name you know it reeks » « Catholics explain why atheists exist