That’s the myth, anyway. Repressive governments will stir up a rising of protest music and street art and great poetry and literature so we’ll at least have that. But wouldn’t you know it, Donald John Trump is fucking that up, too.

I am surprised to learn that there is a Nazi death metal scene in Minneapolis. It’s small but growing, led by a local patent lawyer named Aaron Wayne Davis in his spare time, through a website called Behold Barbarity Records and Distro.

The site sold a customary catalog headlined by name bands like Slayer and King Diamond. But closer inspection reveals an exhaustive selection of more obscure titles, with album covers sprinkled with permutations of neo-Nazi symbols like swastikas and iron crosses.

Take Deathkey, whose 2010 album is called Behead the Semite. Then there’s Aryanwulf, whose songs include “Kill the Jews” and “At the Dawn of a New Aryan Empire.” There’s also the Raunchous Brothers, whose rhyming poetics include such passages as, “You’re of no use to me, you disgraceful fucking dyke, so I’ll shove you in the oven like the glorious Third Reich.”

There are plenty of similar lyrics quoted at the link, so I’ll spare you. I did learn how to write a Nazi death metal song, at least. It isn’t hard.

He describes the power of hate music: Drop the slogan “White people awake, save our great race” a couple times in a chorus, then quadruple it per song, and you have listeners nodding along to it with every step and stumble of their day.

OK, that’s the dark side. There has to be a light side to oppose it, right? There must be some musical genre that has arisen to oppose Nazi death metal. It’s like some core principle of the universe. And out of the darkness rises a gleaming bright beam of beauty and light.

It’s Insane Clown Posse and the Juggalos. On 16 September, there will simultaneously be two rallies on the mall in DC, one of white nationalists, another of juggalos. They are expected to clash.

I have learned that many Juggalos are radical leftists, and that the duo are not fans of our current administration.

Save for this one issue [the FBI has labeled Juggalos a “loosely organized hybrid gang”], ICP is not an explicitly political band, and there are some pro-Trump Juggalos. But the overlap between the Juggalo March and rabid Trumpies is likely to be minimal. Juggalos view their community as a loving family that accepts everyone just as they are, which is the opposite of what Nazi pricks—or, as they prefer to be known, “white nationalists”—advocate. And, in the unlikely venue of a Time magazine editorial on last year’s wave of creepy clown sightings, ICP’s Violent J had this to say about the clowns in Washington:

These clowns threaten the very fabric on which our nation was supposedly founded upon—and for some f—ing crazy-a– reason, they’re getting away with it. From keystone-cop clowns shooting unarmed citizens, to racist clowns burning down Islamic centers or clowns in the NSA spying on us through our cell phones and laptops, America has turned into something far more terrifying than Insane Clown Posse’s Dark Carnival.

So perhaps it shouldn’t be too much of a surprise that radical leftist Juggalos are mobilizing online in opposition to the Trump supporters who are giving clowns a bad name.

I guess I should have expected this, given the nature of their fanbase. But gosh, this could be interesting, come September. The Nazis ought to be worried; they’ll have sticks, but Juggalos have hatchets. Of course, the ICP can be neutralized if the Nazis think to deploy magnets. 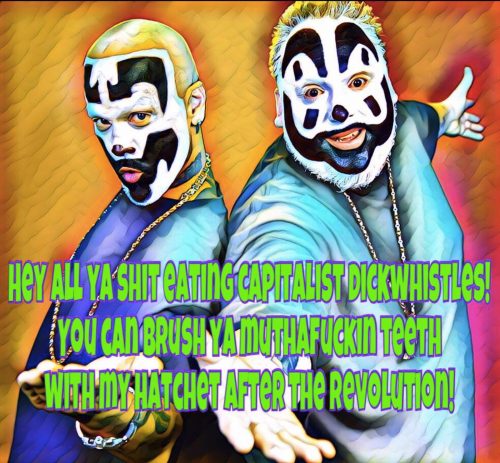 I think xkcd made a comic just for Mano! » « Remember when country music wasn’t all jingo?