The US seems to lack a way to promptly oust corrupt politicians, and Christie highlights the defects in the system. He’s still at the top of the New Jersey hierarchy despite the bridge closure scandal. And now this: there is a state government shutdown which has closed New Jersey state parks (you can’t go downashore on the 4th of July weekend? This is culture shock for that area), except that Christie has used executive privilege to get his family a beach weekend. It’s got to be great — I’ve been to Jersey beaches, and they tend to be a tightly packed mass of milling humanity, except now the budget incompetence of the governor allows him to clear the masses and have the whole beach to himself.

Because this is a Republican administration, though, they have to lie about it. Christie is using a helicopter to shuttle himself from the shore to work (another expense), and he was asked if he was taking advantage of the beach closures.

At a Sunday news conference on the shutdown, Christie was asked if he got any sun today.

Unfortunately for him, a photo had been taken that morning. 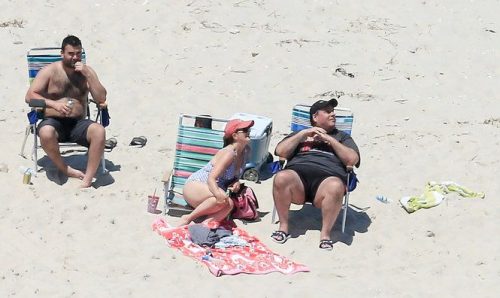 When later told of the photo, Brian Murray, the governor’s spokesman, said:

“Yes, the governor was on the beach briefly today talking to his wife and family before heading into the office. He did not get any sun. He had a baseball hat on.”

He’s in shorts, t-shirt, and sandals, on a beach chair, on the beach, but he wasn’t getting any sun. Right. Got it.

What lessons have we learned, boys and girls?

This should throw a bucket of shockingly cold water on anyone who thinks Donald Trump can be easily kicked out of office by rule of law. I’m beginning to believe that Trump could stand in the middle of Fifth Avenue and shoot somebody and we’d spend a couple of years dithering about what to do.

The Republicans know it, too. Let’s not ignore Christie’s let-them-eat-cake moment.

Asked if this is fair, Christie said Saturday: “Run for governor, and you can have a residence there.”