You would think this would be a dream come true for internet Nazis: a vidya game where you get to play as a Space Nazi in the Star Wars universe. I’m imagining, though, the shock they felt when watching this preview, and tough stormtrooper dressed all in black takes off their helmet, and big reveal…

The Stormtrooper Special Forces warrior is female! Aaaaaieeee! The dream is ruined!

Really, I’m not making this up. Some Nazi youth are horrified, and not just that the protagonist is female, but has brown skin. 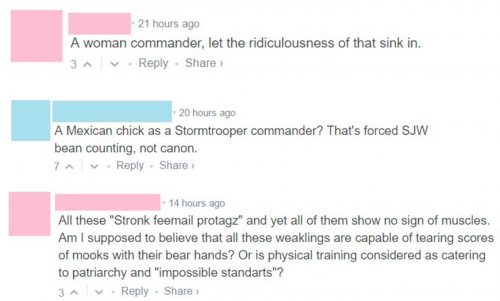 It’s a SFF universe with magic powers thrown in, where spaceships have dogfights like WWI Sopwith Camels, and they’re concerned that including a woman is unrealistic.

Please. If you’re one of the people making that incredibly stupid argument that it isn’t canon, or that women all have teeny-tiny muscles, or that an alien race from long, long ago and far away would all be lightly pigmented, put away your video game controller, turn off your computer/console, and leave the basement. You have to learn about reality for a while.

Seveneves: tedious physics and appalling genetics » « Ducks are girls, cows are boys, everyone knows that