See this guy? His name is Michael Aaron Strickland. 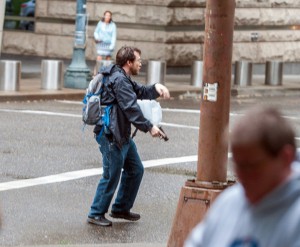 He’s pulling out a gun that he then pointed at a group of Black Lives Matter protesters in Portland, Oregon. He claimed he was feeling “threatened” by unarmed and peaceful protesters because they called him a racist, the poor little snowflake. He was arrested and charged on a slew of offenses.

The good news: He was actually convicted. I know, hard to believe.

The funny news: he exploded his own defense.

Jackson said Strickland’s contention that he was in grave danger isn’t believable, pointing out that Stickland reholstered his gun and stepped off the street and onto the sidewalk to give an interview in front of a TV camera just steps away from the scene of the confrontation.

Oh, man. These people are stupid. Stupid and armed.

Yes, I liked a movie » « I have concluded that I am a natural BOOB MAGNET