Maki Naro and Matthew Francis make an interesting argument against the simulation hypothesis, the idea that we’re all constructs living in a super-duper computer program. I don’t believe in that nonsense at all, but I don’t know that I find his argument particularly persuasive: it rests largely on the idea that the simulation hypothesis implies that undesirable consequences must be the product of intent. 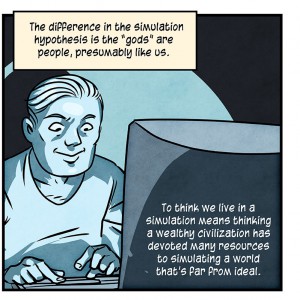 Then I look at the crude simulations we currently produce, like, say, Call of Duty, and I’d have to argue that yeah, if we were the creators of a universal simulator, it would be a shithole universe full of helpless innocents and murderous villains, all intended to be targets of a small number of privileged a-holes with superpowers, and I think that is kind of in alignment with what we see in this world.

I’d also worry about where that argument would lead: to the idea that obviously the wealthy and well-off are the player characters for whom the world was made, while being poor and sick and helpless clearly marks one as an NPC, with no real agency and only the simulated appearance of being a ‘real’ person.

What I find the more useful argument is to go back to the beginning of Naro’s comic, where he quotes Elon Musk: 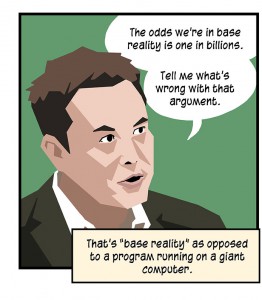 That is the wrong question. He asserts The odds we’re in base reality is one in billions. Instead we should ask, “what simulated ass did you pull those odds out of?”, because he’s got no rational justification for that claim. We could just as well claim that since we can imagine billions of gods, the odds that we evolved by way of natural mechanisms, rather than some divine fiat, is one in billions. It’s simply faulty reasoning. The responsibility does not lie on me to show why his fantasy is false, it’s on him and Nick Bostrom to demonstrate some actual evidence that it is true.

Then, of course, there’s some babbling about how if the simulation hypothesis is true, we should look for glitches in the matrix, little examples deep inside physics where we detect violations of natural law. This is exactly backwards. First you find observations that don’t fit predictions from existing theory, then you develop alternative theories to accommodate those observations — you don’t first invent an unfounded hypothesis and demand expensive, difficult, unlikely-to-succeed experiments to justify it. Especially since the simulation hypothesis is infinitely flexible and can be contorted to fit any observation made. Is there anything the promoters of this bullshit can imagine that would disprove their hypothesis? That’s what they ought to be discussing, rather than how they can twist quantum physics to support their model. 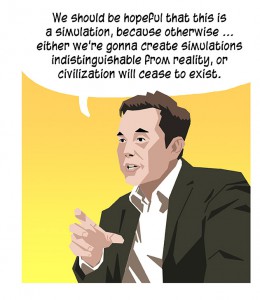 While being completely unable to imagine any test of their idea, and building it entirely on a framework of speculation, they still lock themselves into a bogus binary: civilizations will either be able to simulate a universe, or they’ll go extinct. Seriously, dude? You’re living in a non-extinct civilization that can’t simulate a universe, and you can’t imagine any other alternatives?

I also have to point out that all civilizations and species will ultimately go extinct, so this argument is basically between an inevitable and unavoidable (if undesirable) outcome, and accepting your personal, idiosyncratic, weird notion. No problem.

“You should hope that I’m right, because either we’re going to build a chrysalis made of the skins of kitty cats and puppy dogs and metamorphose into angelic beings of pure light, or you’re going to die someday.” I don’t like it, but we’re all going to die someday, and going on a rampage and slaughtering kittens and puppies is not a logical alternative at all.

One thing Naro’s comic does illustrate well, though, is the elitist psychology of tech billionaires.

Friday Cephalopod: Not an omelet » « Feathers from the Cretaceous