You’ve probably already seen this remarkable “welcome” letter sent to incoming U of C students by Dean John Ellison. It’s probably the dumbest statement I’ve ever seen from a dean, and if you understand the usual antagonistic relationship between the professoriate and the administrative class, you know that’s a strong statement. 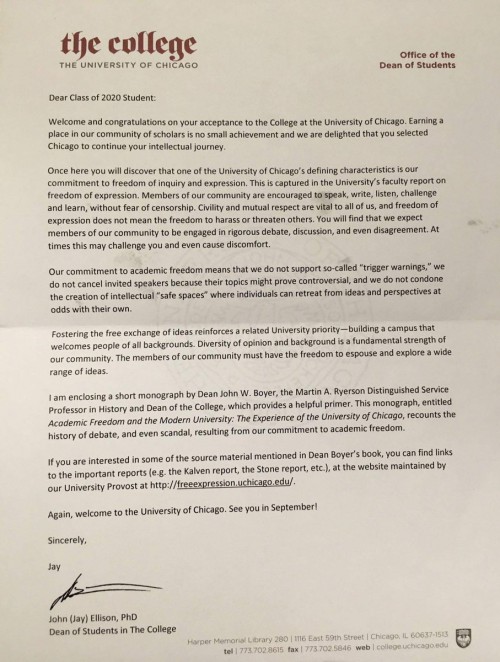 In this astonishingly clueless letter, Ellison promises “freedom of expression…without fear of censorship”, and emphasizes “civility and mutual respect”. These are good and necessary things. But then, in a rampant fit of hypocrisy and ignorance, he announces this:

Our commitment to academic freedom means that we do not support so-called “trigger warnings,” we do not cancel invited speakers because their topics might prove too controversial, and we do not condone the creation of intellectual “safe spaces” where individuals can retreat from ideas and perspectives at odds with their own.

Call me gobsmacked. Does Ellison even realize that his ideals of free speech are in conflict with his declarations in the above paragraph? Probably not. He’s railing against buzzwords he doesn’t understand, is proposing banning concepts that are essential for the free communication of ideas, and actually has a vision for the U of C that is antithetical to the whole idea of a university. In addition, he can’t do that, and I don’t mean that there is some rule that says he can’t, but that rejecting those concepts is literally impossible, without destroying the University of Chicago and turning it into an authoritarian prison.

Let’s start with safe spaces. Does Dean Ellison have a private office? Does it have a door on it? Does he sometimes meet with other deans in closed meetings? Then he creates safe spaces, and works in one. He is simply unaware of it, and takes the privilege for granted.

When the College Republicans meet on campus, is it OK with Dean Ellison of the LGBTQ club marches in and disrupts the proceedings with chants and signs (also, vice versa…but I suspect he’s more sympathetic to conservative organizations)? Or would it be reasonable to call campus security to eject the people who are interfering with the free expression of ideas by the organization? When you set aside a space for a specific purpose, you are creating a safe space to get the job done.

When I teach, I am an enforcer for certain rules of decorum — I create a safe space for learning. That doesn’t mean discussion is put on rails and not allowed to deviate from my plan. I might not allow a conversation about football when the topic is evolution, but if someone raises a hand and makes a creationist objection, which is wrong but on topic, I don’t allow the class to shout down the person (I have been in this situation, where the students are more discouraging of ideas than I am, and I have to crack down and insist that the class address the question respectfully). A safe space is a place where we focus on an issue, and we don’t allow distractions. I guarantee you that every class at the U of C is a safe space for a certain perspective, because that is the nature of teaching. Or does Dean Ellison think every classroom should be the equivalent of the comment section on a youtube video, where the loudest assholes are allowed to dominate?

But I once innocently listed human birth defects as a topic on a syllabus, and a distressed woman met with me to say she was worried she’d lose it in class — she’d given birth to an anencephalic baby a few years before, and she was terrified about that subject. She wanted to talk with me not because she didn’t want to hear about birth defects — on the contrary, she really wanted to learn about it, but she was conscious of her own emotional reaction — and wanted some clearer idea of what I was going to say and show. I told her that in fact I was going to focus primarily on neural tube defects, and that yes, I had some photos of the phenomenon, but the focus was primarily on mechanisms. It was enough that she knew what to expect so she could prepare for it, and she just asked that I let her know before I showed the photos.

I always do that. Before I show students a photo of a deformed fetus, I tell the students that I’m going to show them a photo of a deformed fetus. That’s basic empathy and respect, the very things Dean Ellison says students should expect, while insisting that they’re forbidden if they’re labeled “trigger warnings”. I’m not interested in suddenly springing a shockingly graphic image on the class to make students vomit in the aisles and weep — that’s not a strategy for good learning.

That’s a trigger warning. And I learned that lesson almost 30 years ago, when we didn’t call them trigger warnings, although it was exactly the same thing. Does Dean Ellison think we should talk about controversial topics, but we should always surprise the students with them?

Let’s talk about cancelling controversial speakers. I actually sort of agree with Ellison on this one — once a speaker is invited, there’s an obligation and commitment to carry through on it. But what’s not being talked about is the process that leads to those speakers being invited. Who’s selecting them? Who’s paying for them? What’s the purpose behind bringing that particular person to campus? There are a lot of strings being pulled behind the scenes that the students don’t see until there is an announcement in the school paper or on a poster that hey, U of C is bringing a war criminal to campus! Or an anti-war activist! Then what?

Let’s imagine that the U of C invites Henry Kissinger to give a lecture. Will they create a “safe space” for him, and not allow protesters to disrupt the event? To avoid the appearance of giving a “trigger warning”, will they refuse to announce the date, time, and place of the lecture, and even that War Criminal Kissinger will be on campus? Just all of a sudden, Henry Kissinger will show up in a random class and surprise everyone by telling them about the realpolitik of murdering civilians en masse. That’s basically what they’re going to have to do to enforce the ridiculous policies in that astonishingly stupid paragraph.

But they’re not going to. That’s because that paragraph is not about policing behaviors that every responsible university does naturally, that is an implicit part of teaching and learning. It’s because he is sending a different message.

We all create safe spaces and give trigger warnings and expect that our institutions of higher learning will feature worthy speakers. It’s just that if you are part of a privileged, dominant majority, you don’t have to say it: you can trust that your values will be well represented, sheltered, and unchallenged. It’s only if you are a member of a minority that you find it necessary to be explicit and openly demand a place for your ideas; these phrases about “safe spaces” and “trigger warnings” only evolved because people found that institutions were unthinkingly assuming that the majority (and the money) rules, and it took hard work to hammer out room to talk about alternative views or oppression or privilege.

The problem is that now those phrases are used as red flags to tell that privileged majority that, hey, look, here’s a minority group that’s trying to carve out a place in our university — quick, shout ’em down. Silence them. Make up rules to break them apart, to allow us to openly disrespect their concerns, to allow us to shove horrible people in their faces while not allowing them to complain. This is not about encouraging “freedom of expression”, it’s about creating tools to club down anyone who opposes the accepted status quo.

And the University of Chicago has a Dean of Students who supports this regressive attitude, and who is pleased to be able to tell new students that they are disrespected unless they conform.

Shame on the dean, shame on the University of Chicago, and shame on all those people I see who consider this a good thing. Unsurprisingly, a lot of those fans seem to be people who also detest feminists and Black Lives Matter, a degree of correlation that ought also to cause some soul-searching among the progressive people who don’t see anything wrong with that letter. You’re on the side of Libertarians, the Daily Caller, and Breitbart.

You’re also on the side opposite that of thoughtful professors who are aghast at the authoritarian privilege on display.

As a faculty member, I would be enormously dismayed if my dean sent this letter to my incoming students. Because now they’ll come into my class already having received a clear message about what my institution seems to value-and it isn’t them. The Chicago letter reeks of arrogance, of a sense of entitlement, of an exclusionary mindset; in other words, the very things it seeks to inveigh against. It’s not about academic freedom, it’s about power. Know your place, and acknowledge ours, it tells the students. We’ll be the judge of what you need to know and how you need to know it. And professors and students are thus handcuffed to a high-stakes ideological creed. Do it this way, in the name of all that is holy and true in the academy. There is no room here for empathy, for student agency, or for faculty discretion.

Bradford DeLong has a similar view of the necessity of safe spaces and trigger warnings. He’s responding to a rather twisted article that calls Ellison’s letter an “affirmative case for a liberal conception of campus free speech”, which is not just a charitable reading, it’s an I’m-giving-everything-away-and-taking-a-vow-of-poverty reading.