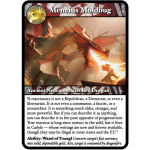 I probably shouldn’t make fun of what they call themselves — these people are dangerously wrong. An in-depth article on Vox dissects the Alt-Right, the Dark Enlightenment, the Neo-Reactionaries, or whatever the heck they call themselves today. There’s Mencius Moldbug, and Nick Land, and HBD Chick, and 4-chan, and anti-semitism, and Milo Yiannopoulous, and Donald Trump, and Gamergate — all different flavors of shit mixed into the ugliest ice cream cone ever.

There isn’t much glue holding this conglomeration together, other than elitism and hatred of others and a mass of privilege that allows them to afford being insufferable douchebuckets.

It’s only plutonium. It’s only near the Columbia River. » « Amazon supporting scammers