One of those wacky Islamists took to pestering me on Twitter with a flurry of standard Allah-pologetics. They were embarrassingly stupid, and I finally had to block him. But I thought I’d share one example of his bad reasoning. 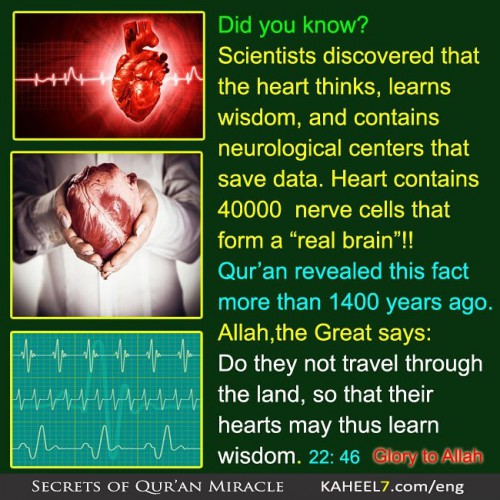 This is a standard approach they take. Here’s some remark made by Mohammed, usually something short and lacking in detail; now here’s some modern scientific discovery that superficially agrees with Mohammed’s vague comment; therefore, Mohammed had some deep scientific insight of divine origin, proving that he was a true prophet.

So let’s look at the quote from the Qur’an.

Do they not travel through the land, so that their hearts may thus learn wisdom. 22:46

Does that sound like a scientific declaration to anyone? It’s a poetic metaphor, is all. It might also be a warmed-over vestige of Greek philosophy, although it has become such a common colloquialism that I wouldn’t use it to claim that Mohammed was a serious scholar of Greek thought (especially since that is another prong of Islamic ignorance: Mohammed was really badly educated and ignorant, they say, so anything he got right had to have been introduced into his head by magic). But yes, the Greeks had complex ideas about souls, with an appetitive soul situated in your gut, a rational soul in your head (but probably not your brain), and an emotional, spiritual soul in your heart. And now people will say “bless your heart” or say that someone is “kind-hearted” or talk about a kind and generous person as “big hearted”.

It is not and is never intended as a scientific claim, that such people have a large cognitive center in their chests that is advising their brain to be charitable or friendly or loving. That would be silly. It’s an expression not intended to be taken literally. I think it’s safe to assume that Mohammed is similarly using an expression in a colloquial way.

But not our Islamist kook! No, Mohammed is literally arguing that there is a brain located in your heart. It has to be true, because Mohammed never lied and knows everything. So he’s going to take this simple phrase and mangle science to make it support his belief.

There is nervous tissue throughout your body; it’s how you sense the world, know the position of your body parts, and regulate the activity of your organs. Your enteric nervous system contains about half a billion neurons lacing through your guts, and you’ve also got a sympathetic and parasympathetic nervous system. These do not mediate conscious thought. They do not “think” as we recognize it, and they don’t necessarily learn, especially not in a way that we’d call wisdom. The heart contains nervous tissue that generates a rhythm, and that responds to electrical and hormonal signals to modulate the heart rate. It does not sit there composing Valentine’s Day greetings or responding to scenery during traveling with passionate odes to lovely landscapes. It is not a brain. No one calls it a brain. This guy is just making it all up.

One clue about that is the phrase contains neurological centers that save data. Oh, bullshit. He’s just stringing together sciencey-sounding words to sound clever, when anyone who knows anything can read that and tell instantly that he’s pompously confabulating.

He’s doing something the fundamentalist Christians also do: making their prophets look like idiots by insisting on imposing narrow modern interpretations on their words. Mohammed is making a pleasant enough comment about how travel broadens the mind and increases our understanding, and that’s a sensible thing to say — it may be commonplace, but I’d have to agree that in the ordinary meaning of the phrases, Mohammed is saying something that is trivially true and reasonable. And then along comes @ahmdabdallah17, insisting that what Mohammed is doing is talking in a pretentious way about the anatomy and physiology of the heart, in which case he’s making Mohammed sound as ignorant and stupid as he is.

Ken Ham does the same thing when he requires a ‘literal’ interpretation of the Bible — it completely strips it of any literary quality, where the authors chose their language for poetry’s sake and for its emotional resonance, and turns it into a badly written, grossly erroneous engineering manual.

Why do these people despise their supposedly revered forebears so much?

The anti-PC police are in the wrong » « Strangely enough, it all turns out well