Would you believe that the Twin Cities branch and the Morris campus of the University of Minnesota are having major seminars in the same week? Next Wednesday, UMTC will be hosting Milo Yiannopoulos and Christina Hoff Sommers on feminism (try not to laugh); on Friday, UMM will be hosting a Philosophy of Biology symposium, with Marlene Zuk, Alan Love, Emilie Snell-Rood, and many other highly qualified speakers. 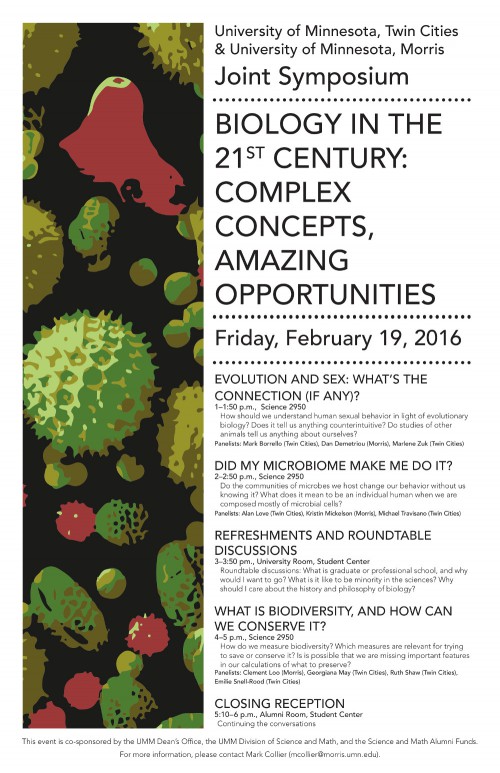 Is it nice or fair of me to compare the two institutions on the basis of an official university event and a crackpot group of students? No, it is not, but you know how institutional rivalries are.

Anyway, I’m very much looking forward to this one. What’s particularly perfect about it is that it’s being held at the same time as my first year course, where we’re talking about evolution. Guess who gets to skip out on teaching that day and instead send all his students to listen to some extremely appropriate expertise?

As for the rest of you, you could attend both, since they’re two days apart. If you’re in the Twin Cities, though, I’ll understand if you decide to flee the stench early and come out to fabulous Morris for an extra day or two.

Does R.K. Milholland spy on me with secret cameras? » « I think I can skip this one