We shouldn’t need to ‘pledge’ to do this, but it seems decency is not all that common. 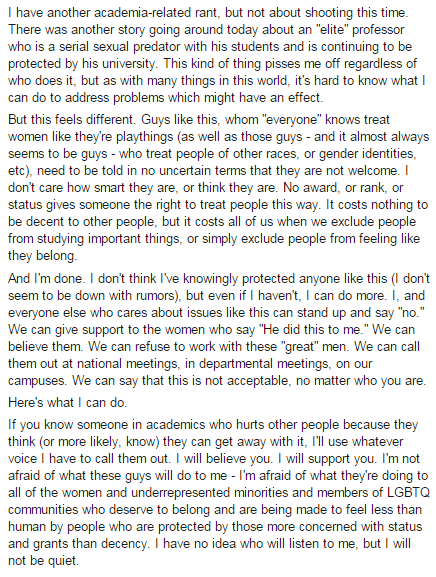 If you know someone in academics who hurts other people because they think (or more likely, know) they can get away with it, I’ll use whatever voice I have to call them out. I will believe you. I will support you. I’m not afraid of what these guys will do to me — I’m afraid of what they’re doing to all the women and underrepresented minorities and members of LGBTQ communities who deserve to belong and are made to feel less than human by people who are protected by those more concerned with status and grants than decency. I have no idea who will listen to me, but I will not be quiet.

I have to add a comment, though. This looks easy, but it’s not. Here’s what will happen to you if you follow through on that commitment:

Don’t let that stop you from taking the pledge, though. I just believe in the principle of informed consent, so before you jump in, it’s good to know what to expect. The first time the issue seriously comes up, I guarantee there will be cold sweats and despair and you will feel like you’re committing a kind of suicide. But be strong.

Just tell yourself that the victims of that asshole experienced much worse, so you need to do the right thing.