I still get lots of plain old US Mail — it’s almost always from a crank or religious apologists, so it’s kind of entertaining. I’m not a big fan of certified mail, though. That usually means someone is going to bluster and threaten to sue me for something. I got some yesterday.

To provide a little context, I pointed out in 2008 that the latest stuff published at a meeting by Richard H. Lambertsen represented a serious decline in quality from the previous work of this rather well-known cetologist. He did not take it well. Lambertsen wrote me an email in which he suggested that I need to read some of his papers to appreciate the depth of his thinking.

In particular, they don’t explain how the evolution of the craniomandibular articulation in baleen whales was the enabling mutation that permitted the occurrence of free will, what this has to do with Einstein’s special theory of relativity, the significance of the death of the largest blue whale known on 20 March 1947, and how you tie all these disparate observations into the conclusion that humanity is about to undergo a speciation event. I looked in particular in the paper on lunge feeding for evidence that George W. Bush stole your driver’s license, as you claimed in your paper, to no avail.

He has now written to me again, by certified mail. I’ve scribbled on it a bit, I hope you don’t mind. 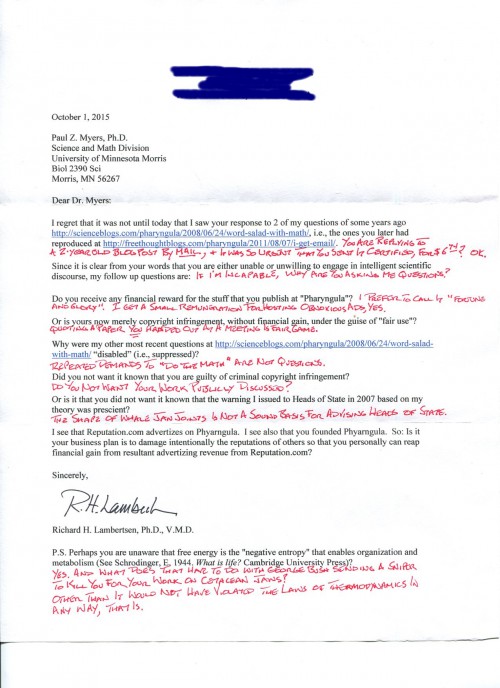 Given the pace of his responses, I don’t think I’ll hear from him again until about 2019, and I expect either a telegram or possibly an attempt to communicate by Morse code.

Would you like to volunteer to work at the Ark Park? » « Nimrud, Hollywood, all the same