Sam Harris is still going on and on about how we ought to racially profile airline passengers. We’re looking for suicidal jihadists, he says, so it’s ridiculous that we’d give the same attention to someone who looks like Jerry Seinfeld that we would to someone who looks like Osama Bin Laden. Never mind that extremely few people who look vaguely Semitic are suicidal jihadists; it’s an injustice to white people to subject them to the same indignities as brown people, but it’s not an injustice to falsely target brown people as terrorists because, well, they’ve committed the sin of looking like Osama Bin Laden.

We’ve been around and around on this subject. Bruce Schneier, the security expert, schooled him on the flaws in his idea, and really exposed the shallowness of his thinking. It’s bad security. It alienates people who are just as interested as we are in flying safely. It’s statistically naive, ignoring the problems with false positives.

I think it’s also a premise built on unquestioning bigotry. There is an assumption that people who look a certain way based on race will be less humane, more prone to violence, and a greater danger to law abiding citizens of White America, who would never ever harm anyone. The facts, of course, expose that for a sham.

Here’s an example from the streets of Ferguson. 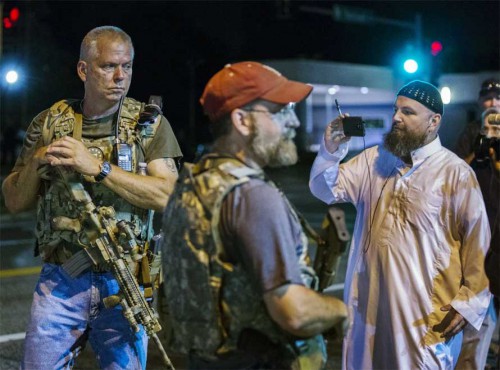 Of those three men, who would Sam Harris thinks poses the greater threat to peace and stability in Ferguson? Clearly, it’s got to be the potential suicidal jihadist on the right, not the righteous Christian Oathkeepers who are patrolling the streets with deadly firepower in their hands.

The dismaying thing about this interview with Harris is that he hasn’t budged a bit — the facts explained to him by a security expert didn’t sway him at all from his bias that brown skin and Semitic features equates to fanatical jihadism. Science, how does it work?