I just saw this video put out by A Voice For Men: it’s a bunch of drunk guys insulting Amanda Marcotte and Jessica Valenti while doubling over in laughter at their own “jokes”. I am dumbfounded that they thought this was worth recording, and then at the amazing cluelessness that led them to think it would be a good idea to put it on youtube for all to see. 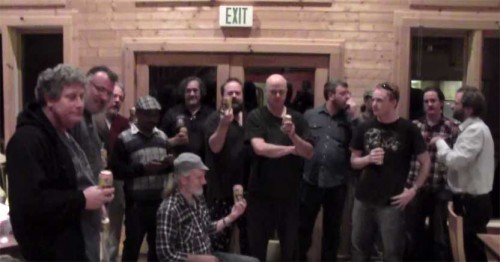 It was posted by Paul Elam, with this comment:

Look, it is just some men having non PC fun. If you find it offensive or a “bad thing” for the men’s movement, you can blow it out your ass.

SJWs Please keep those comments coming. I am doing a follow up on this based on your comments. Great lesson in PC and in your own hypocrisy. There is already enough here to work with, but if you want to add gravy…… all the better.

Yes. Because shouting “your pussy stinks” at women is “non PC” bravery. Read Marcotte’s post — she’s got these yahoos pegged, and no amount of bluster is going to get them out of the hole they have willingly dug for themselves.

Come for the science, flee from the claustrophobic horror » « Hasn’t learned a thing