It’s an outrage! It’s also got the only good excuse for displaying one. Here it is: 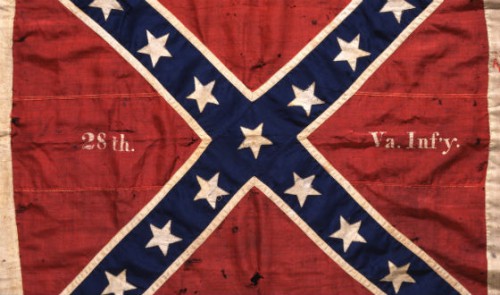 It’s a trophy. Minnesotans captured it in battle at Gettysburg. A few years ago, Virginians had the gall to ask for it back.

“The third day of Gettysburg, the 47 Minnesotans that survived the day before, rejoined the battle and that was the day that they captured the flag of the regiment of Virginia… which resides in the Minnesota Historical Society to this day,” Dayton said. “The governor of Virginia earlier this year requested that the flag be loaned, quote, unquote, to Virginia to commemorate — it doesn’t quite strike me as something they would want to commemorate, but we declined that invitation.”

“It was taken in a battle at the cost of the blood of all these Minnesotans,” Dayton continued. “And I think it would be a sacrilege to return it to them. It was something that was earned through the incredible courage and valor men who gave their lives and risked their lived to obtain it. And as far as I’m concerned, it’s a closed subject.”

Exactly right. It’s the loser’s flag; why you’d want to celebrate it is a mystery. But we’re happy to rub it in your nose, if you’d like.