Miley Cyrus has done a nude photo shoot. To which I shrug, and note that we’re all naked under our clothes, and that I’m not particularly interested in Miley Cyrus, or her music, or her opinions, so fine. I am unperturbed and unenthused.

But then, I’m not Ken Ham. Ham is distraught that she made fun of the cash cow he’s hoping to start milking, and I’ve noticed that the issues that most distress Answers in Genesis is any challenge that might impede the revenue stream.

Although she was raised Christian, Cyrus maintains a particular contempt for fundamentalist lawmakers who rally against this sort of progressive, potentially life-saving change. “Those people [shouldn’t] get to make our laws,” she says. Those people — the ones who believe that, say, Noah’s Ark was a real seafaring vessel. “That’s fucking insane,” she says. “We’ve outgrown that fairy tale, like we’ve outgrown fucking Santa and the tooth fairy.”

OK, I confess, I do like some of Cyrus’s opinions, including her promotion of veganism. Ken Ham does not, and seems to find it convenient that a mocker of his Ark is a pervert.

Miley Cyrus is a popular singer and actress who rose to fame and fortune after her role in the television series Hannah Montana. She became a teen idol because of that role. But what parent would want their child looking up to someone like this today who now as an adult shakes her fist at God and promotes sexual perversion?

Recently, Cyrus posed nude for Paper magazine. (By the way, the origin of clothing is in Genesis when God gave clothes because of our sin—the first blood sacrifice as a covering—a picture of what was to come in Jesus Christ who would die for our sin; see Genesis 3:21.). Now, I will not direct people to that pagan magazine by linking to it, but many news sources carried quotes from the interview she did with this magazine.

Isn’t theology fun? I had to read Genesis 3:21 to see what he was babbling about.

21Unto Adam also and to his wife did the LORD God make coats of skins, and clothed them.

22And the LORD God said, Behold, the man is become as one of us, to know good and evil: and now, lest he put forth his hand, and take also of the tree of life, and eat, and live for ever: 23Therefore the LORD God sent him forth from the garden of Eden, to till the ground from whence he was taken. 24So he drove out the man; and he placed at the east of the garden of Eden Cherubims, and a flaming sword which turned every way, to keep the way of the tree of life.

So an angry god slaughtered some animals and made coats to cover up Adam and Eve’s newly naughty bits, which is just like killing Jesus to cover up our sins. Ooooookaaaaay. I notice that in the second instance he didn’t make anyone a nice Jesus-skin coat, and now I’m kinda wanting one. Curse you god! <shakes fist at sky> Where’s my flayed Jesus apparel?

Ham goes on and on about all this wacky interpretation of his old book. You don’t get to reject the goofy book of Genesis (or paying $29.95 to enter his “museum”), because if you do, you are COURTING ETERNAL DAMNATION.

The same expletive was used a number of times in the interview. As you read what she reportedly said, it becomes very obvious that it’s not just the biblical accounts of the Ark and Flood in Genesis she is dismissing, but she is rejecting our Ark of salvation—Jesus Christ. Really, Noah’s Ark is a picture of salvation. As Noah and his family went through a door to be saved, so we need to go through a door to be saved from sin and its eternal effects of separation from God. God’s Son became a man (a perfect man—the God-man) to die on a cross and be raised from the dead to pay the penalty for our sin of rebellion against our Holy Creator.

Therefore, by their own reasoning, there was no salvation by torturing one guy 2000 years ago, and Christianity is false. Yay! All done! The whole structure disintegrates by finding one flaw!

But of course, the kind of fanatical Christian represented by Ham does not actually accept falsifiability. The desired conclusion justifies believing absurdities, and believing them hard.

It also helps that it’s profitable. Ham ends his complaints with an advertisement, suggesting that Cyrus come visit his “Ark Encounter” when it’s done. Or the Creation “Museum”! That would be fun. Did you know there’s a wrecking ball in there? 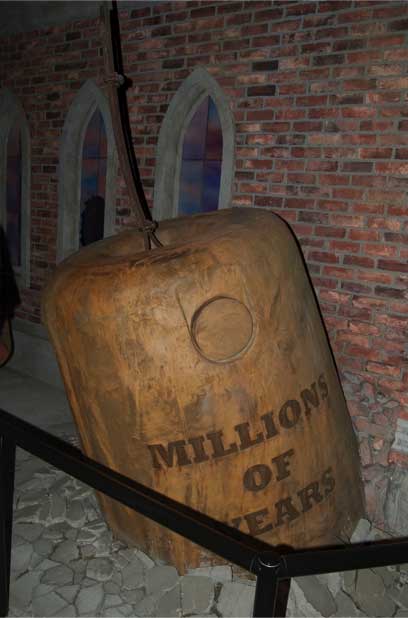 Oh, great. They’re teaching them to use swords now » « A simple answer to open-carry idiots