Some football player named Ray Rice got in a fight with his fiancée, and knocked her out cold in an elevator — there is surveillance of him dragging her unconscious body out. You would think, maybe, that a professional athlete would have at some time learned that he’s very strong, and that a little caution in dealing physically with other was warranted, and maybe that the appropriate way to deal with someone you purportedly love does not involve beating her unconscious.

Rice has sort-of-apologized in a press conference — to which he brought his new wife to also apologize for her actions (makes you wonder what kind of beating she’d get if she didn’t). And now he’s been sort-of-punished, so the NFL is back to stroking his ego.

It’s also precious as heck that Ray Rice feels an obligation to The Children, what with being a role model and all, but maybe he should not be a role model because, kids, lady-beating is wrong, even if the NFL doesn’t really think so. Sure, it suspended Rice for TWO WHOLE GAMES and fined him $529,411.24, which sounds like a lot of money until you realize that it is merely two games’ worth of pay for Rice the Role Model. But everyone in the sportsball world is tripping over themselves to assure us that Ray Rice really is a nice guy, no really, and he will never ever knock his wife out cold again, he promises, even though the recidivism rate for lady-beaters is about 110 percent. (Okay, not exactly, but pretty close.) Here’s the team’s general manager, Ozzie Newsome, giving Rice some quality reach-around, but not in a gay way of course, because that would be a REAL problem for the NFL:

“We also respect the efforts Ray has made to become the best partner and father he can be.” Newsome said. “That night was not typical of the Ray Rice we know and respect. We believe that he will not let that one night define who he is, and he is determined to make sure something like this never happens again.”

Hmm. I’ve been married for 34 years, and she’s never hit me, and I’ve never hit her. In our case, if I started using her as a punching bag, you could say it’s “not typical”…but even that many years of respectful behavior would not be sufficient to justify doing harm now. But if he’s a pro football player, it’s all water under the bridge.

What I’d like to know is whether, if there is any other issue of domestic violence with this guy, the NFL will come back and say, “We were wrong — turns out thumping women is typical of Ray Rice, he’s an asshole, and he’s fired.” Any takers on that one? I suspect instead the NFL is right now deploying a team of PR specialists prepared to hush up any future incidents.

But here’s a professional apologist for athletes from ESPN commenting on the issue: 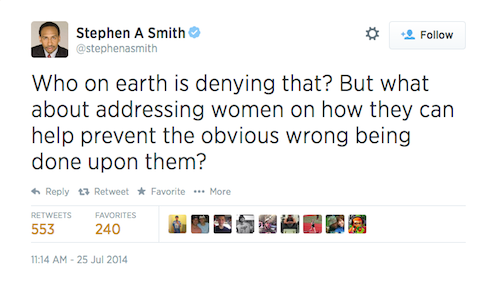 But what about addressing women on how they can help prevent the obvious wrong done upon them?

Who else plays Minecraft? » « Sharp lines