Remember Ben Stein? Lazy character actor best known for his mind-numbing drone, reactionary conservative who writes dull screeds on bogus economics, the creationist voice of Expelled? He’s in the news again, when we’d all rather he just goes away.

He wrote a bizarre rambling bit of nonsense for the American Spectator about how he travels the country, helping breathakingly beautiful women, taking them out to dinner, giving them writing advice, and boy, does airline food suck or what, and Obama is a failure. And he spent a fair amount of the essay just writing about this stunningly beautiful, absolute knockout young Eurasian woman who just happened to be in the airport.

As I walked through SFO in search of my driver, I came across a stunningly beautiful, absolute knockout young Eurasian woman. She was lying on a bench right next to where my driver was supposed to be, so I sat down next to her and chatted her up.

This story has evolved somewhat. Now she’s ambushing him and harassing him for money..

About five months ago, as I was walking through SFO to get into my car, I met a young woman who was extremely excited to meet me. She was literally jumping up and down with excitement. She told me she was a “performance artist” but hinted at some scary parts of her life. She said she would like to be a writer and asked if I could help. We exchanged texting addresses and off I went in my car. I spent fewer than five minutes talking to her in a busy airport terminal.

See? Ben Stein thinks Ben Stein is the kindest, sweetest person around. He deserves a medal for helping a young, beautiful woman out, giving her money and advice.

“I should get a medal for helping this woman. This is a person who appealed to me for money. She said she would send me some examples of her performance art. Some of those examples were racy, and some were not. I just don’t get what I have done wrong. She is mad at me because she wanted more money. … I didn’t expect anything from her.”

This “I am not a crook” moment was prompted by the fact that the young woman, Tanya Ma, released screen shots of their phone messages. And it’s true, he didn’t touch her, he didn’t do anything criminal — he just exposed the fact that the private Ben Stein is a deeply creepy person.

Sext messages below the fold. Wash your hands afterwards.

He writes to her, asking for sexy pics. 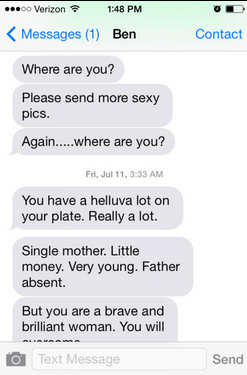 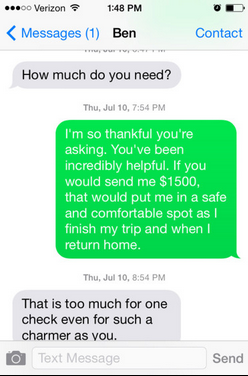 She thanks him for his help…and whoa, here we go, plunging off the cliff. 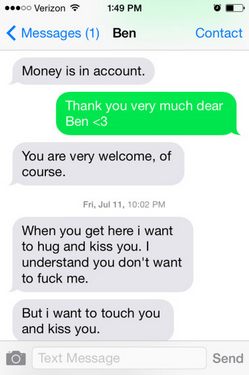 He demands a reply. She demurs. She is not his girlfriend! 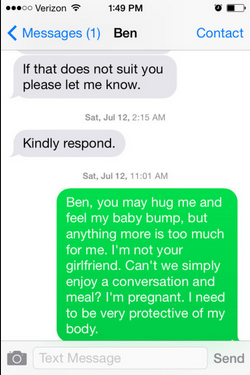 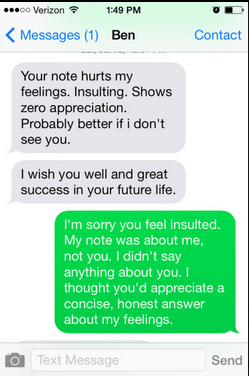 Her feelings are the problem. Dang, she’s pretty articulate in squashing Ben’s delusions. 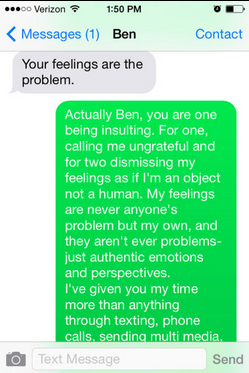 In his weird denial in The American Spectator, which mixes befuddled confusion about why he is being persecuted with existential dread about the fate of Israel, he closes with a pious appeal.

I looked in “The Gift of Peace,” my book of sayings to bring calm:

* When all else fails, turn it over to God.

* I am a person made up of the seven deadly sins. I always will be. I should not be surprised by it. It’s called “Being human.”

* Luckily for me, God works by mercy, and not by justice.

* Fear is the common human condition. Faith is the solution.

* What happens to me is not very important.

* Acceptance of what God sends me is not a choice. It is a necessity.

I am not kidding. I am not at all important. But, please pray for Israel.

Isn’t it sweet how religion is so undiscriminating that it allows the worst sinners to claim grace?