Probably not. But the New York Times reports:

A review of studies has found that the health benefits of infant male circumcision vastly outweigh the risks involved in the procedure.

Actually, it doesn’t. Not at all. The paper is all about the frequency of circumcision in the US; this is the only real data in the paper, and notice that a good chunk of it is speculation. 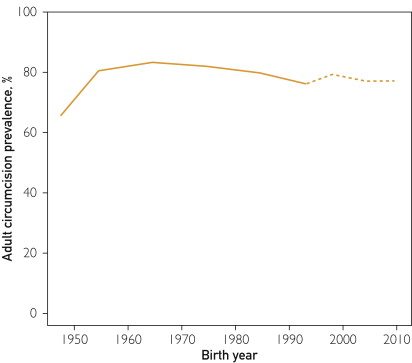 Prevalence of adult circumcision in the United States during the past 6 decades (1948-2010). The solid line represents documented prevalence among adults; dashed line, [Morris’s] predictions.

It does toss in a table purporting to show the tremendous risks of not circumcising baby boys, but this is not new — these are the same sloppy data that the author has been peddling for over a decade. With some trepidation, I give you a sample from his 2007 paper: don’t trust these numbers! 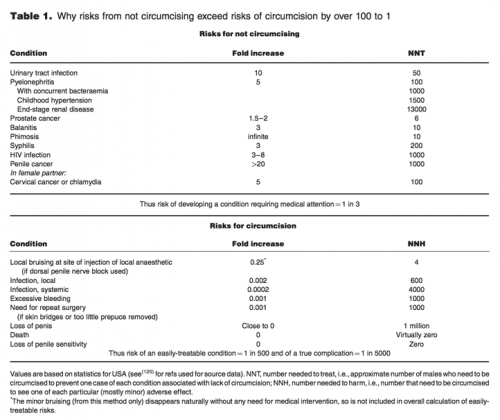 The author is Brian Morris, better known as the Man Who Hates Foreskins. He’s a real crusader, who touts foreskin removal as just as important as vaccination — that leaving it intact imperils the child to a 1 in 3 chance of a serious condition requiring medical attention. You might immediately question how he arrives at this conclusion — by multiplying a series of dubious assertions together — and the likelihood of it being true, given that circumcision is a culturally variable practice, and that countries where it’s rare (for instance, in Scandinavia, where the frequency of circumcisions is around 2%) don’t typically have emergency rooms crowded with young boys whose penises are in painful, infected, states, raddled with disease.

I suppose it could be because glorious Scandinavian penises are perfect and universally wholesome — that’s what I’ve been told, anyway — but that would be baseless speculation and unwarranted extrapolation of anecdotes into unsupportable evidence, of the sort that Brian Morris does.

Or look at his claim of much greater rates of HIV infection. There actually is some interesting mechanistic reasoning behind that: the foreskin represents an enlarged area of delicate membrane which could be an avenue of entry for some viruses. But the real test would be an epidemiological study: there are lots of circumcised men around, and lots of uncircumcised men, when we look at the rates of infection, is there a significant difference? It hasn’t been done very often, but when it is, the hypothesis often fails to be supported. Here’s one example of a scientist who thought heightened sensitivity to STIs was a reasonable hypothesis (his “hunch”), but found it didn’t pan out at all when examined.

Armed with this hunch, rather than set up a website I chose to do some research. Australia is a good place to do such research because there is a roughly even population split for the intervention (circumcision) and in most cases it is not a maker of ethnicity, wealth, education or religion. Unexpectedly, our research findings were uniformly negative. Circumcision did not protect against STDs in our clinic population, though we did not look at HIV because it is rare in heterosexual men in Sydney.

Then there are some of Morris’s very peculiar ideas. This is the abstract from a paper advocating more circumcision; note that one of his arguments is basically that women find uncircumcised penises ugly. As usual, no evidence for that is presented.

Circumcision of males represents a surgical “vaccine” against a wide variety of infections, adverse medical conditions and potentially fatal diseases over their lifetime, and also protects their sexual partners. In experienced hands, this common, inexpensive procedure is very safe, can be pain-free and can be performed at any age. The benefits vastly outweigh risks. The enormous public health benefits include protection from urinary tract infections, sexually transmitted HIV, HPV, syphilis and chancroid, penile and prostate cancer, phimosis, thrush, and inflammatory dermatoses. In women circumcision of the male partner provides substantial protection from cervical cancer and chlamydia. Circumcision has socio-sexual benefits and reduces sexual problems with age. It has no adverse effect on penile sensitivity, function, or sensation during sexual arousal. Most women prefer the circumcised penis for appearance, hygiene and sex. Given the convincing epidemiological evidence and biological support, routine circumcision should be highly recommended by all health professionals.

I suspect that women’s preferences are going to be shaped by culture, by familiarity, rather than some objective hideousness of the foreskin, and what the heck is appearance doing in a paper that is supposed to be summarizing medical evidence, anyway?

It’s also an argument that can cut both ways. When presented with evidence that one phenomenon, dyspareunia (painful intercourse) was found to be more common in partners of circumcised men than uncircumcised men, Morris waved it away by arguing that women in countries with lower rates of circumcision might be disturbed by the sight of a cut penis.

Morris et al. should be commended for their creative attempt to dismiss the higher prevalence of frequent dyspareunia in women with circumcised (12%) than uncircumcised (4%) spouses (ORs between 4.17 and 9.00). They suggest that Danish women with circumcised spouses may be so psychologically troubled by the shape of their spouse’s penis that it might result in painful intercourse. A more plausible explanation would be that reduced penile sensitivity may raise the need among some circumcised men for more vigorous and, to some women, painful stimulation during intercourse in their pursuit of orgasm.

But then, that’s Brian Morris all over the place. He actively tries to suppress work that doesn’t support his conclusions, he inflates any evidence that suggests circumcision might have a few benefits (there are some!), and dismisses any evidence to the contrary…or worse, twists it around to claim it supports the opposite of the author’s interpretations. All this in defiance of worldwide statements from pediatric organizations that say the evidence for health benefits from circumcision are weak, and that routine circumcision is not recommended.

One other weird thing: why are circumcision advocates so obsessed with this procedure? It’s certainly not that the benefits are as solidly established as they are for vaccination; reading the literature, the most striking observation is the murkiness and insignificance of the evidence. If you’ve got lots of studies, and they vary up and down in their conclusions, and are constantly skirting the margins of likelihood, what’s the best explanation: that there is a strong effect that can only be detected by true believers, or that we’re dealing with no effect at all and people are cherry-picking peaks and troughs from statistical noise? I lean towards the latter. The former is also the excuse used by psychics, UFOlogists, and Bigfoot hunters.

Morris has been trying very hard to dissociate himself from Gilgal, at least, but still…eww.

“Gilgal”, by the way, is apparently Hebrew for “hill of foreskins”. Really? They needed a word for that? Double eww.