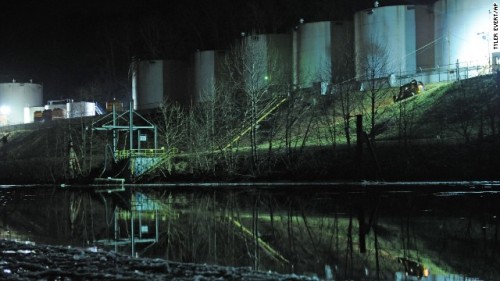 A chemical plant in West Virginia, for a company called Freedom Industries (there’s a name that screams last refuge of scoundrels for you), spilled about 5,000 gallons of 4-methylcyclohexane methanol into the local water table. It turned the water in the rivers blue-green and reeking of licorice. The safety sheet for this chemical has a few cautions.

26: In case of contact with eyes, rinse immediately with plenty of water and seek medical advice
27: Take off immediately all contaminated clothing
28: After contact with skin, wash immediately with plenty of … (to be specified by the manufacturer)
29: Do not empty into drains
30: Never add water to this product
33: Take precautionary measures against static discharges
35: This material and its container must be disposed of in a safe way
36: Wear suitable protective clothing
37: Wear suitable gloves
39: Wear eye/face protection

I like how the treatment suggestions include rinsing immediately with water. What do you do when the water is tainted with this stuff?

But don’t panic! The director of the West Virginia Water Research Institute is telling everyone not to worry.

Even at its current concentrations, however, the chemical is unlikely to cause any serious harm, Ziemkiewicz said.

“You’d have to drink something like 1,700 gallons of water to even approach a lethal dose,” he said. If a person drank a glass or two of tainted water, “I would be astonished if that caused any serious problems.”

Seriously? They’re simultaneously telling everyone to not drink the green water, don’t bathe in it, don’t wash your babies with it, and hey, the green stinky chemical contaminants coming out of your tap are just fine? Perhaps Ziemkiewicz would like to define “serious”. It seems to be something along the lines of “you’re not dropping dead, your glass of water is just making you vomit.”

Our expectations of what it means to live on a habitable planet seem to be dropping. I don’t think the head of an institute dedicated to researching clean water ought to be downplaying the toxic effects of the coal industry on water quality in the region. But that’s just me.

At least we aren’t getting the Ayn Rand approach to environmentalism yet, which would argue that the chemical tint to the water increases its scenic value, and that that odor is the scent of prosperity.

And we’re only getting a little bit of an effort to tie environmental disasters to biblical prophecy. 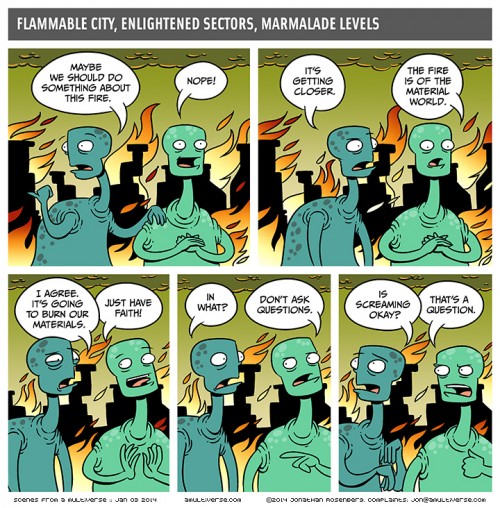 So sure, it could be worse. The whole planet could be exploding, but all we’re doing is soaking it with toxins. You could be melting and dying in agony right now, but really all that’s happening is that you’re drinking a slow poison.

All misery is relative.

Don’t let the little things bother you, like dilute chemical irritants in your drinking water.

Go fight the big problems, like exploding planets and melty death. Let the little ones slide.

You can trust a company called Freedom Industries, can’t you?

Vengeance is mine, saith the teleost » « I have something in common with Ally Fogg