It was on Facebook. I knew it would be insulting, but I had to take a picture. 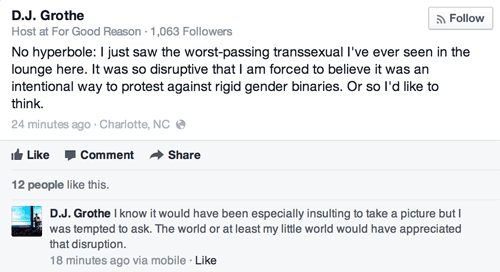 No hyperbole: I just saw the worst-passing transsexual I’ve ever seen in the lounge here. It was so disruptive that I am forced to believe it was an intentional way to protest against rigid gender binaries. Or so I’d like to think.

Just beware, transsexuals: you must meet DJ Grothe’s high standards before appearing in public. You will be judged.