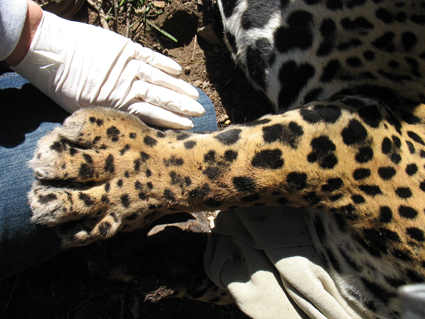 I wrote here about the accidental 2009 capture and subsequent euthanasia of Macho B, an aging male jaguar who’d wandered across the U.S. border into southern Arizona.

Last week, in a really rather remarkable bit of investigative journalism, Dennis Wagner of the Arizona Republic reported that Macho B’s capture may not have been precisely accidental:

Although Game and Fish officials claimed Macho B’s capture was accidental, [Biologist Emil] McCain actually set the snare along a favored trail and baited it with scat from a female jaguar in heat. Then he flew to Europe to visit his girlfriend, leaving Smith and another Game and Fish employee to check the traps.

Macho B was caught on Feb. 18, 2009. Smith promptly shared the news with Ron Thompson, the Game and Fish administrator overseeing carnivores, who fired an e-mail to McCain in Spain, announcing: “Thorry did it!” [Thornton “Thorry” Smith, McCain’s colleague]

As word spread, congratulatory messages contained a hint of conspiracy. McCain received one e-mail from a co-worker who wrote, “And just think, he was an ‘incidental’ take. The hell with politics.”

The answer: “Yes, it was incidental, and you know that. Right? I had nothing to do with this right? And neither did Ron.”

Thompson then issued a warning about indiscreet messages: “Emil, be aware that we cannot use the government email to communicate with you. Sky Island (Alliance) is calling it a conspiracy, and for the first time they are right!”

For those of you not conversant in Endangered Species Act jargon, “take” is defined in that act as “to harass, harm, pursue, hunt, shoot, wound, kill, trap, capture, or collect [a listed species], or to attempt to engage in any such conduct.” An incidental take is a take that’s not deliberate, but rather a side effect of some other activity.For instance, accidentally capturing a jaguar in a snare you’ve set for pumas.

Which means, if Wagner’s report is accurate, that AZ Game and Fish employees and contractors tried to pass off a deliberate take as an incidental take. In other words, fraudulent violation of Federal environmental law.

Why? Wagner has an idea:

The ability to track a jaguar known as Macho B would make the state agency and its contractors clear favorites to win a multimillion-dollar research grant. It would bring prestige to scientists and administrators involved. And it might provide valuable information about the border travels and habitat of an endangered species.

The last three years have been a festival of conflicting stories and fingerpointing. McCain was convited of violating the Endangered Species Act and given five years probation, during which time he’s not allowed to study big cats in the US. So he’s doing so in the Eastern Hemisphere. Biologist Janay Brun, who had acted as McCain’s assistant, agreed to a plea bargain and is writing a book.

Here’s what that “incidental” take did to an aging cat:

[S]ometime on Feb. 18, 2009, an aged feline known as Macho B stepped on the tripping mechanism with his left front paw. No one witnessed what happened next. Based on injuries and evidence at the scene, however, there is little doubt that the creature’s escape efforts were panicked and prolonged.

One of the jaguar’s legs was cut and severely swollen. A canine tooth was broken off at the root. Claw fragments, hair and fluids were recovered from the tree trunk. A javelina tooth was inexplicably stuck in the jaguar’s tail.

Brun has described the cat’s struggles in an online interview, based on her visit to the site afterward. “Macho B fought,” she said. “I don’t know how long he fought, but he was climbing this tree, clawing the tree, biting the tree, banging himself against (a boulder). He fought and used probably every last ounce of strength he had. … It just absolutely killed him.”

Macho B was tranked, collared, and released, and recaptured two weeks later when his transmitter stopped moving. Despite being gravely ill, with a septic hind leg that was hugely swollen, it took some doing to get him back in custody.  He was euthanized for kidney failure shortly after recapture.

Wagner details further dissembling, both before and after Macho B’s death, by both Game and Fish and US Fish and Wildlife Service staff. It’s a difficult read, but Macho B deserves no less.

Around FtB » « STOP DISTRACTING ME, PHARYNGULA!