Jebus. After reading Ben Radford’s reply to the criticisms of his awful article denying sexism in the toy store, I feel even more repelled. It was ludicrous. It was ridiculous. It was pretentious.

So when I insisted that Riley was wrong in her claim that girls are forced or “tricked” into buying or liking pink items or princesses, my purpose was not to be pedantic, but instead to keep the discussion grounded and rooted in objective evidence.

No, Radford does not get to claim to be “grounded and rooted in objective evidence”, not after that nonsense aout women evolving to pick berries and nurture sick kids (I notice he doesn’t even try to defend that crap this time around). But worse, what he does immediately after piously declaring his skeptical sobriety, is to defend his freakishly stupid argument that girls like pink because it is the color of their doll’s skin.

“One obvious reason is that dolls are by far the most popular toys for girls. What color are most dolls? Pink, or roughly Caucasian skin-toned. There are, of course, dolls of varying skin tones and ethnicities (the popular Bratz dolls, for example, have a range of skin tones). But since most girls play with dolls, and most dolls are pink (a green- or blue-skinned doll would look creepy), it makes perfect sense that most girls’ toys are pink.”

Rebecca apparently believes that most dolls do not have “pink, or roughly Caucasian skin-tones.” To Rebecca, the claim that most dolls have “pink, or roughly Caucasian skin-tones” is a “ridiculous fantasy story.” What’s her evidence for this? Did she do any research? Nope, she zoomed in on a screen capture of Riley taken with a cell phone and concluded that few if any of the dolls are pinkish. (Watch the first ten seconds of the video and see how the background colors change every few seconds; this is pretty much the definition of a flawed experiment, as she’ll get different tones depending on when she freezes the picture.)

Who’s right, me or Rebecca? I could cite studies about the dearth of minority skin tones in children’s dolls, but there’s a much easier way to do it. Decide for yourself: the next time you’re in a toy store, craft store, or anywhere else where dolls are sold, look at the skin tones on the majority of the dolls. Are they roughly pink tones, or are they another color? Or do a simple Google image search for “dolls” and see what skin color most of them show up as; according to Rebecca, it will be anything but pink.

OK, Mr Objective Evidence, please ground this exceedingly peculiar claim, which I have never seen made before, in some of that real evidence. I tried that google search thing he recommended, and yeah, Rebecca was right: most of them weren’t that unholy bright shade of pink associated with girly toys. Here, for example, is a nice representative image that turned up, with lots of dolls: 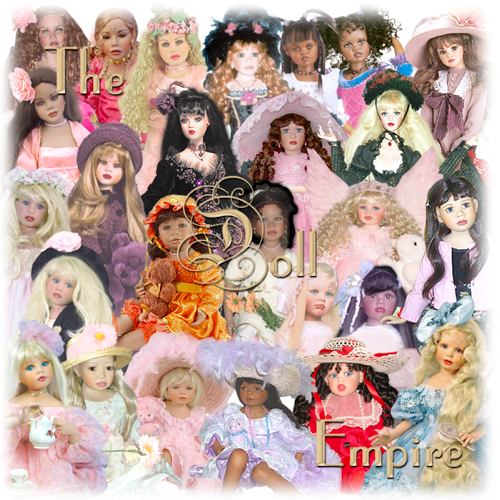 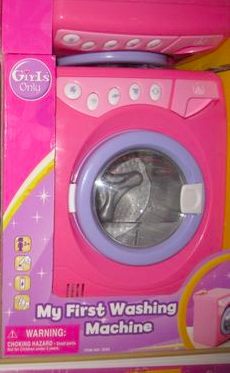 All different shades turn up from off-white to brown, but none are actually pink. Lots of the dolls are dressed in a nice pastel pink; compare their dresses to their skin tones.

I can’t believe I have to explain this. It is simply and obviously not true that the packaging of girls’ toys is designed to blend in with their skin, or their doll’s skin. I’d like to see some of that evidence that toy manufacturers sample nice Caucasian girls’ skin color and use that as a key for choosing the color of their toy washing machine and its cardboard box. I’d like to see some evidence that girls want toys that, chameleon-like, they can blend in against when playing with them naked. I would like to see evidence that somehow girls desire toys painted in skin tones while boys are looking for something that reminds them of cyanotic corpses. I would like to see some measurements in which Radford pulls out a colorimeter, aims it at some little girls face, then aims it at the garish bright pink of a toy box, and shows me that they are even close to the same color.

You don’t get to claim to be the one true objective skeptic while spouting such ad hoc bullshit.

Then he makes it worse. Rebecca Watson pointed out another major flaw in his arguments:

Radford’s rebuttal is to repeat the same argument with added condescension!

I’m not sure what Rebecca doesn’t understand about this, but I’ve spelled out the logic below, maybe this will help:
1) Most girls play with dolls
2) Most toys that girls play with are dolls (i.e. they are by far the most common girls’ toy)
3) Most dolls are pink
4) Therefore most girls’ toys are pink.

I can do a Venn diagram for her, but it’s valid.

It’s circular. It’s built on a false premise and it says nothing at all. The question is why, in our particular culture, do we have a specific set of gender roles, why do we apply pressure to children to conform to those roles, and as a very secondary question, why are girls’ roles so brightly flagged with pink?

Radford is begging the question. Of course little girls like Riley are urged to conform, and of course it’s all tied up in societal rewards for fitting in to a particular pattern of behavior; Riley can recognize that, why can’t Radford? In this case, our social norms erect great big unmistakeable flags to tell little girls that one specific set of objects are explicitly tied to their identity as girls. They defy them at their peril, and sometimes even four-year-olds can tell when they’re being fitted for a straitjacket.

Radford is supposed to be a fairly widely-known and respectable member of the skeptic community. I am appalled and disappointed that these babblings are how he responds to criticism, and that further he has the gall to pretend he’s the one with the “objective evidence”.