It’s called the buybull because believers buy the bull.

George Barna of the “Cultural Research Center” at Arizona Christian University, has published a paper entitled (the link is to a PDF of the paper):

Millennials Seek a Nation Without God, Bible and Churches

The fact that they’re studying this tells you they’re worried, and not just because their numbers are shrinking and aging, much like baseball’s fanbase and Fox Nuisance viewers.  Religious fanatics are losing the “culture war” because their own policies hurt the younger generations, so the kids have rejected it.

There are more than two dozen examples of Millennials being substantially more likely than any other generation to reject biblical principles in favor of more worldly spiritual perspectives and practices.

Millennials, defined in the CRC research as people born between 1985 and 2002 (i.e., aged 18 to 36 at the time of the survey), are far more likely than any other generation to:

Define success in life as happiness, personal freedom, or productivity without oppression

Be among the “Don’ts”—people who either do not know if God exists, do not believe that He exists, or do not care if He exists

I fail to see how Millennials and GenXers are “threatening” anything other than stopping religion’s stranglehold on society.  They’re not worried because “young people are immoral”, they’re worried because religion no longer has power and blind obedience.

Those spiritual transitions represent a continuation of dramatic changes introduced by Gen X prior to the arrival of the Millennials. George Barna, the veteran sociologist who has been studying national religious patterns for more than four decades, pointed out that the reshaping of America’s religious landscape began nearly 60 years ago. Baby Boomers were the most aggressive initiators of spiritual change, he noted, embracing dramatically different beliefs and behaviors than their predecessors. Their successors, Gen X, realigned the nation’s religious boundaries even further. The youngest adult generation of today, Millennials, are now threatening to reshape the nation’s religious parameters beyond recognition.

Together, Gen Xers and Millennials (i.e., two generations currently in their late teens through mid-50s) emerged with many beliefs that stand in sharp contrast to those held by Boomers and Builders (the two generations in their mid-50s and older).

The table below (a screenshot of page 3 in the PDF) shows the change in attitudes by generation.  What I don’t buy is the “You treat others as you want them to treat you” claim which is self-reported.  I wager younger people are simply more honest, that the older generations were self-serving and dishonest in their attitudes on racism, sexism, LGBTQIA rights, etc. (i.e. kindness is reserved for those you like).  The idea that being older and more religious equates to “morality” is laughable, especially considering the behaviours of their own leaders. 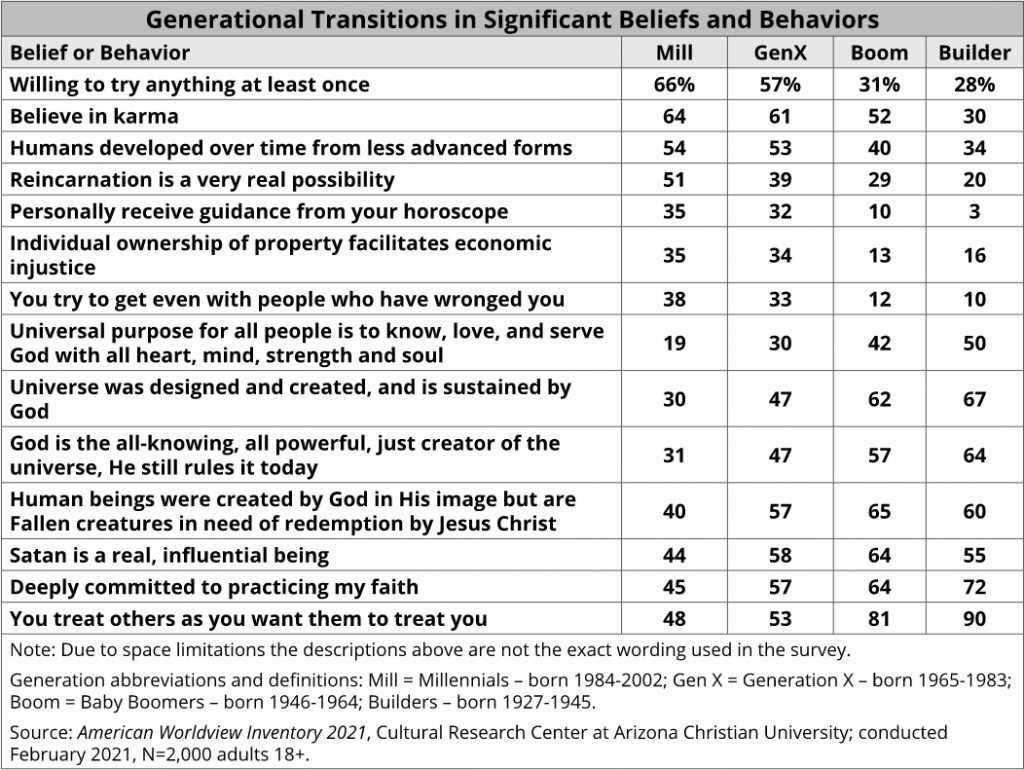 Read this tripe from page 5 where they whine and lie about “indoctrination in schools”, “religion hasn’t pushed back”, “responsibilities of government have been significantly broadened”:

A Challenging Time for the Christian Church

This is the 30th anniversary of the publication of Barna’s breakthrough bestseller, The Frog in the Kettle (1990). The author of more than 50 books since then regarding faith and culture, Barna pointed out that the American Church has been like that frog in boiling water for the last three decades—and the frog is barely surviving.

“Gen X and the Millennials have solidified dramatic changes in the nation’s central beliefs and lifestyles,” Barna noted. “From a nationwide perspective, the Christian Church has done shockingly little to push back. The result is a culture in which core institutions—including churches—and basic ways of life are continually being radically redefined.”

Asked to give examples of such change, he expanded his comments. “The family unit and traditional family practices have been reshaped, with some long-term, fundamental family ideals and practices outlawed. The responsibilities of government have been significantly broadened and transformed. The influence of the Christian church has diminished while the influence of arts, entertainment, and news media has exploded. As millions of parents discovered during the pandemic, public schools have become indoctrination farms rather than places for teaching basic life skills.”

The US teetered on the brink of becoming a fascist theocracy where eliminating “them” almost became policy, governmental force as the tool of religion, and they have the sads because it didn’t succeed.

Slaughterhouse Five Exists: Greg Abattoir is making Texas into one » « Hurry Up And Wait: Two weeks turns into a month