In February 2021, an object was found amongst boxes donated to an organization.  At first, it was mistaken for a folding ruler.  But after consultation with the American Oughtred Society, it was determined to be a slide rule made in 1753, one of only five in existence.  It’s a truly amazing find.

Prior to electronic calculators invented in the early 1970s, slide rules were the portable calculators of the world that powered the Industrial Age.  Steam liners, aircraft, skyscrapers, NASA and Soviet space missions, etc. were all built using slide rules.  A slide rule was on the Apollo 13 mission, how they did the calculations to get themselves home safely.

A rare 270-year-old artefact, which may be one of just five left in the world, discovered in a Canberra warehouse was first dismissed as just a ruler.

When Sandie Parkes from the Green Shed stumbled across a 270-year-old slide rule, used for mathematical calculations, she first thought it was a foldable ruler.

“We get a lot of foldable rulers come through, so I thought that must be what it is,” she said.

The historic artefact was dropped at the Mitchell warehouse sometime late last year and made its way to the Civic store when Ms Parkes decided to get to the bottom of what exactly the bizarre item was.

She came across the American Oughtred Society, a group “dedicated to the preservation and history of slide rules and other calculating instruments” and United Kingdom Slide Rule Circle, who said the item was one of just five of its kind in the world.

The slide rule is believed to be designed by John Suxspeach and called a Catholic-Organon or Universal Sliding Foot-Rule.

According to the Cambridge University Whipple Museum, Suxspeach was a London schoolmaster who decided to make the slide rule widely available to the public and got the first Royal Patent for it in 1753.

Slide rules are like 18th century microscopes.  People may not use them on a day to day basis anymore, but everyone should know how to use one.  Asian countries still learn mathematics on abacuses.  It’s important to understand how the science progressed from one tool to another.

On a side note, related to a prior post about Napier’s Bones, slide rules will turn 400 years old in 2022, first built by William Oughtred in 1622.  (I wouldn’t say he invented it because he merely combined other people’s discoveries into one device.)  Also, Genaille-Lucas rulers turn 130 years old in 2021. 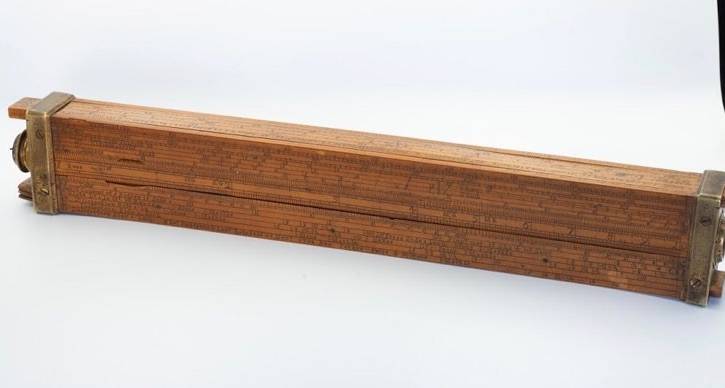