Yes, it’s Chinese New Year again, February 12, 2021.  Gong Xi Fa Cai.  CNY occurs on the second new moon after the winter solstice, but changes every year because the traditional Chinese calendar has either twelve or thirteen months.  And you thought calculating easter was hard.  It can be anywhere from January 21 to February 20. Subtract eleven days every year, and if it goes before January 21, wrap from the other end (2022 is February 1; 2023 is January 22; 2024 is February 10).

It also means a day or seven of insufferable noise, fireworks going off at all hours for a week, just what my ears don’t need.  At least I get a week off of work.

2021 is the year of the Ox, the second year in the twelve year cycle.  Don’t say cow, because it’s a homophone for a swear word in Mandarin.

That’s not my year, 1967 was year of the Goat.  No, I don’t believe in astrology one iota.  Chinese astrology is just as much hokum as European.  Goats allegedly represent “filial piety” (yeah right, my “parents” are dead and I’m glad), “purity” (if you knew me, you’d laugh) and “kindness” (well, I try and live up to that one).

Just as some say cow or ox for 2021, some say sheep or goat.  I used to hate being “year of the sheep” because prior to transition I was as timid as one.  Now I embrace the goat, and recently got a tattoo of an Ibex on my leg.  It’s only an outline for now, I’ll have another artist detail it later.  Yes, I know the male ibex has long horns, the female has short ones, but they look so cool. 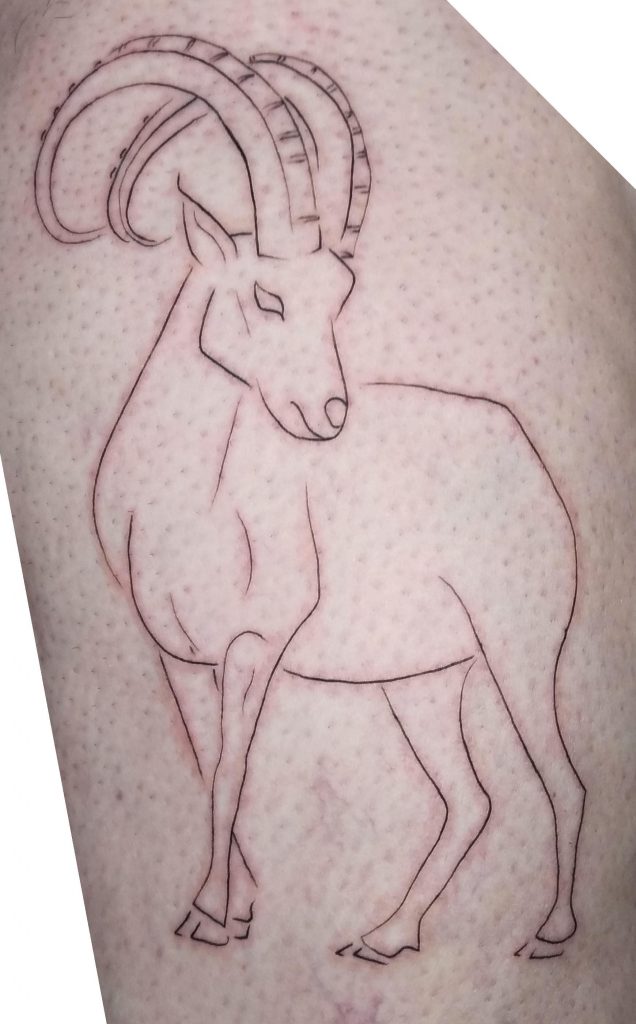 With no international travel and a COVID-19 outbreak in Taoyuan, one would expect very little travel this year, even though CNY is the biggest holiday in Chinese culture.  No such luck.  The trains are all packed and booked well in advance.  Even getting a bus at this point will be difficult.

New restrictions for train and bus travel in Taiwan are being enforced.  There’s no eating on board anymore, though drinking and taking medication is allowed.  On trips under three hours that might not be hard to enforce, but anyone taking a bus or regular (blue) train from Taipei to Kaohsiung will be cooped up for six hours. Good luck getting people to comply.

The High Speed Rail has also changed its seating.  Normally, cars 5 and 6 are business class (80 seats), cars 1-4 and 7-9 are reserved seating (95), and cars 10-12 are unreserved, what I call the “cattle cars”.  Normally 100-110 people pack into the unreserved cars, but that’s over.  All the seats are now reserved only to minimize how closely packed people are.

Due to the massive COVID-19 resurgence outbreaks in Wuhan, Beijing and elsewhere in China, the government has put severe restrictions on travel within the country.  It’s estimated that travel will be down 60% this year.  But even with the restrictions, about 1.5 billion trips will be made within the country, still the biggest mass migration of humans in the world, bigger than the US’s total for thanksgiving and xmas in a non-pandemic year.  The difference this time is all Chinese travel is within their own borders or to Hong Kong or Macau.

The first holiday after CNY is Lantern Festival, which is on the fifteenth day of the new year, two weeks after CNY itself.  This year, that’s February 26th. Lantern Festival involves large outdoor celebrations of people gathering to launch paper lanterns (mini hot air balloons of paper with small candle inside). Taiwan will still be marking 228 Day at the end of the month, since that’s not a “party” holiday.

For obvious reasons, Taiwan’s government has cancelled Lantern Festival 2021 indefinitely, with hope of celebrating it in the summer.  It’s likely all other countries and cultures in Asia are doing the same, no mass gatherings allowed.

Unlike New Orleans which has inexplicably allowed Mardi Gras to go ahead.  As if closing bars is going to make any difference.  All that will do is create superspreader parties on the street with no way to track the disease.

A Good Deed Punished: Dr. Hasan Gokal is out of a job » « Archaeological Dig: And you thought historical revisionism only happened here