Commodore International released the VIC-20 home computer in June 1980.  It was Jack Tramiel‘s second attempt to cash in on the growing microcomputer revolution with a low cost yet usable computer to compete with the Apple II, TRS-80, Atari 400/800 and other early personal computers.  It was not Commodore’s first home computer, but it was a major advance over it’s first effort, the Commodore PET.  It was the VIC-20 which brought down prices and “democratized” computing, forcing and allowing other companies to produce low cost machines.  (Yeah, I know I’m six months off the release date.  Let’s pretend we’re talking about the first big “computer christmas”, where they were given as gifts in large numbers.  I’m also doing this now in response to a recent video I saw on youtube.)

Ironically and by pure chance, I’m writing on December 14th.  Noted in the link above, Jack Tramiel was born on December 13, 1928.  The creator of the 6502 chip that powered Commodore’s computers, Chuck Peddle, died December 15, 2019.  Beginning, middle and end.  More below the fold.

It was the second generation of 8bit machines that changed things and made computers a must-have for tech enthusiasts.  The Apple II+ in 1979 was more powerful for the same price as the Apple II, and it could run Apple II software, but was still unaffordable for most people.  The TRS-80 model III released in July 1980 was more powerful and slightly cheaper than its predecessor (US$700), but it had severe compatibility issues between old and new software.  It might as well have been a new machine.

The VIC-20, released in 1980, was backwards compatible with the PET (and forwards with the Commodore 64), both in software and hardware (except for cartidges, which were not).  The improved VIC-20 keyboard, more RAM (yes, 5KB was more than the previous machine), usability with standard TVs, and low price (US$300 in 1979, $800 today) made it a winner.  Millions were sold in the three years it was on the market, before Commodore ceased production and focused on the C64, the biggest selling computer model of all time (an estimated 10-15 million sold).

It’s true that the 5KB of RAM restricted program size (only 3.5KB available to the user), but the version of BASIC on it and available Peeks and Pokes extended what it could do.  RAM expanders existed (3KB and 16KB), and the VIC-20 had three ways of using software: external cartidges which contained their own ROM, tapes in cassette recorders, and the 1540 disk drive.  Other peripherals for the PET like joysticks were also compatible with the VIC-20.

The VIC-20 also benefitted from a well made keyboard, something the PET lacked.  Many people are still using these machines after forty years without a breakdown.  The VIC-20’s text capabilities were minimal (176×184 pixels, 22 characters per line, no graphics mode), but on an NTSC/PAL TV screen, it was still readable.  The Apple II and TRS-80 almost required using a dedicated CRT monitor or it would be a blur, another advantage over the competition.

Here are some videos to watch about the history of the Commodore VIC-20.  Most are links to youtube, only one is shown below.

Dave Murray, the 8Bit Guy, provides a 28 minute history and how-to about the VIC-20.  He also did a video on Super Expander RAM cartidge and an EPROM programmer for the machine, and covers retro games released for the VIC-20, one of them his own.  People are still making cartidge games for the VIC-20, if you can believe it.

Two years, ago, the 8Bit Guy did a two part “restoration” video on a VIC-20, part 1 and part 2, mentioned in the quoted text below. It was covered in oil, scuff marks, dirt and other gunk, yet he managed to repair it to working condition.  At the end of part 2, he says the machine was likely used in an industrial environment, hence its condition.

That statement becomes all the more interesting when you watch his video below from November 2020, when he recovers a number of VIC-20s from a recycler, and takes them back to his studio.  If you skip ahead to 7:00 (after the squeaky styrofoam), he shows a modified VIC-20, and makes an astounding and mindblowing statement:

So at this point you may find yourself asking, “David, what the heck is this thing? What is this monstrosity that somebody made?”

I think there’s something I need to explain first. If you go back to the early 80s, like 1981 to 1985, there was no Raspberry Pi, there was no Arduino. So if you were building some kind of industrial control system or something that required a computer to interface with it, the cheapest thing you could get was going to be a VIC-20.

I mean, technically you could get like a ZX-81 or Timex Sinclair 1000 for cheaper, but the membrane keyboard on it made it very unsuitable for those types of applications. So the VIC-20 was often the choice of the day for what someone might use an Arduino for.

And so I did that episode a while back restoring that old oily, nasty VIC-20 and I had speculated in that video that that computer was probably used in some sort of industrial environment to control some sort of milling equipment or something like that. And that was actually really common.

He goes on from there to demonstrate the machine.

Lo and behold, an actual example of a VIC-20 and C64 used in an industrial setting, seen in RUN magazine’s issue of October 1986. 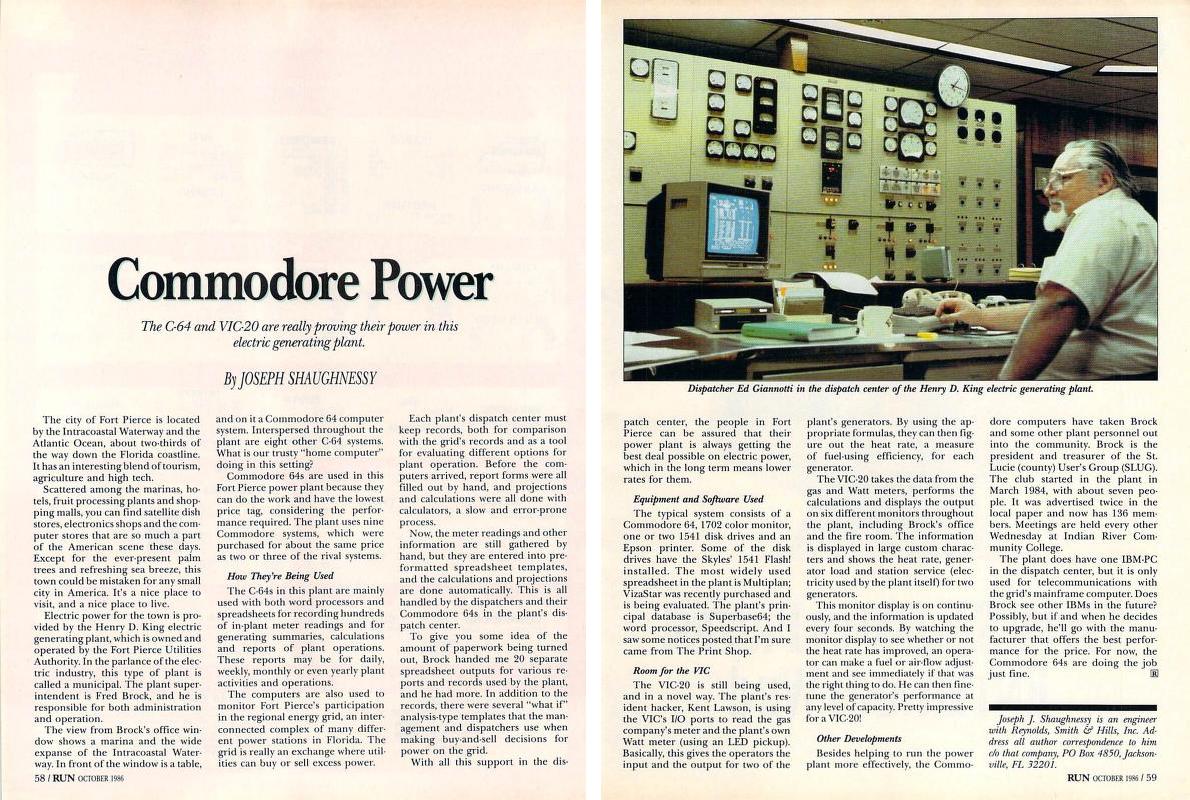 But can it play DOOM?  As Nostalgia Nerd proves, it can.  Another youtuber demonstrates forty columns on the VIC-20, something thought not possible.  Adrian’s Digital Basement demonstrates a different 40 column card for the VIC-20 along with two RAM expansions – one of them 28KB, hand made in the 1980s.  Astounding stuff.

VIC-20s and Commodore 64s have become so desired in the retro computng community that new versions are being made, and not just emulations on a Raspberry Pi (although such things do exist).  Here is a review of the VIC-20 / C64 Maxi.  Being unable to scour second hand stores and recyclers is one of the biggest regrets I have about living abroad, they just don’t exist here.

Since 1980, rumours abounded about the VIC-20’s name when made for the German market.  I don’t have definitive proof the stories are true, and Jack Tramiel’s background as a holocaust survivor makes me question whether he would have known about or approved the computer’s first and second choices of German name.

The story goes that Commodore was told that VIC sounds like a profanity in German, so they chose to change the name to Vixen.  Then it turned out Vixen was an even worse name in German.  Eventually they settled on VC-20, or “VolksComputer” (people’s computer), a play on the name Volkswagen (people’s car).

Did I ever own a VIC-20?  Sadly, no, though the sort of friends I had in high school (socially awkward, like myself) were also heavily into computing.  Their families had various computers of the era, including Commodores.

My “parents” were the ignorant sort who said, “Why should we buy the same thing as everybody else?” and only looked at the price tag.  I said “Buy an Atari 2600”, they bought an Odyssey 2.  When I said “Buy a VIC-20 or Apple II”, they bought a TI99-4/A.  It wasn’t until 1985 when a local computer store sold clone Apple II+ computers that we finally had a decent machine.

Why Wait: Cleveland FINALLY plans to change the name » « Music Rules: And why homophobia sucks