Two separate events from the past weekend show a stark contrast in attitudes toward safety and technology in motorsports.  Both incidents had a positive and a negative in what happened. 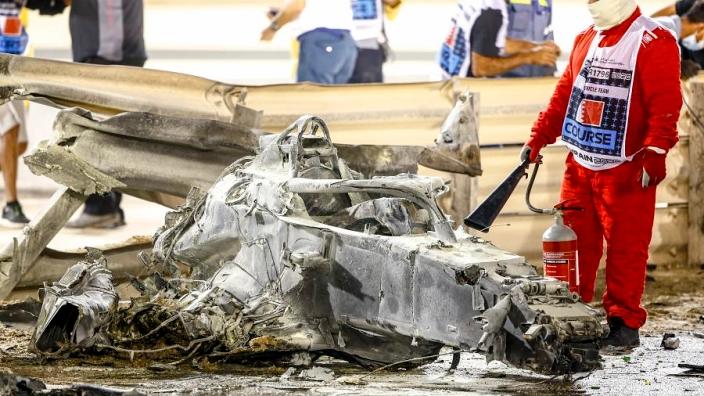 Formula 1 has had its third to last race of the 2020 season.  It and the second last race are both held at the Bahrain International Circuit on different layouts to provide two different races.  On Sunday, they raced on the 5.412 km Grand Prix track, and next Sunday on the 3.543 km Outer track.  Both meet FIA Grade 1 certification (suitable for F1), but the outer circuit’s estimated lap times will be around 55 seconds, less than the one minute minimum the FIA usually requires (one of the reasons the Parabolique was added to Dijon in 1977).  The patchwork nature of the 2020 season has made this necessary (no races in North America, South America or Asia), several held on tracks that once but no longer hold F1 races (Imola, Istanbul Park) or are not normally used for F1 (Mugello, Portimão).

Sahkir was built in a desert, so elevation changes are minimal and sight lines good, with few blind corners and all top grade safety equipment.  But even a track built to the highest standards can still be dangerous, as Sunday’s race proved.

On the opening lap, Romain Grosjean’s right rear was touched by Daniil Kvyat’s front left, causing Grosjean to spin to the right.  Normally that wouldn’t be much of an incident, but Grosjean and all the others were bunched up and accelerating out of turn three.  The contact turned Grosjean’s car, sending him into an armco barrier at over 200kmh, exactly at the point where the armco was closest to the track, and his trajectory at roughly a 45 degree angle.  It was reminscent of both Robert Kubica’s 230kmh crash in Canada in 2007 and Dale Earnhardt’s fatal crash at Daytona in 2001.

Armco are steel panels attached to metal poles anchored in the ground.  They are usually for sections of tracks at lower speeds or on street circuits which cannot built permanent barriers.  (And they are heavily used on public roads where speeds are much lower.)  The place where Grosjean crashed was assumed not to be a high speed point of impact (a case of poor track design), the wall too close to the track.  The armco was literally obliterated, and the wall replaced with a concrete barrier before the race could resume.  And there was no shock absorption on that wall – no tire barrier, no Tecpro (air bags), no SAFER barrier.

Halos became a standard and required piece of Formula 1 safety equipment in 2018, a horseshoe shaped piece of titanium with a narrow centre pillar directly in front of the driver.  Many fans object to the halo because it’s ugly and it obstructs the driver’s view.  I object to the halo because it’s not safe enough; I want closed cockpits as they have in hydroplane racing and most motorsports series.  The halo was expected to protect one driver in its first two years.  Instead, three drivers walked away from potentially fatal injuries in the first year alone, thanks to the halo: Charles Leclerc at Spa, Alexander Peroni at Monza, and Tadasuke Makino at Catalunya.

Grosjean’s car pierced and penetrated the lower pieces of armco. The top rail was deflected by the halo on his car. If there hadn’t been a halo, Grosjean would likely have died, potentially decapitated or his head crushed. In the wreckage, you can see where the halo and collar (to prevent side to side head movement) are left behind.  The HANS device (which protects the driver in frontal impacts) helped keep Grosjean conscious, able to undo his own seatbelts and get out in seconds.

Worse yet, the car was ripped in half, and the full fuel tank erupted in flames (they use the same gasoline street cars use).  Grosjean suffered second degree burns to his hands but no other injuries despite the fire and massive crash.  The visor on his helmet melted, but due to the improvements in helmet designs, he suffered no facial or head injuries.

The medical car staff (Dr. Ian Roberts and ex-racer Alan van der Merwe) arrived at the crash site in seconds, pulling Grosjean from the centre of the fire with no harm to themselves.  At the start of races, the medical car is placed behind the starting grid and follows them for half of the first lap precisely because of incidents like this.  The start is where drivers are most closely bunched together and travelling at the same speeds, fighting for position.  First lap crashes are common; many are infamous.  Mention “Spa 1998” to most Formula 1 fans, and they’ll give you a dirty look.

Grosjean’s crash is the worst Formula 1 accident since the deaths of Jules Bianchi in 2015 and test driver María de Villota in 2013 and feeder series crashes like Sophia Floersch’s Formula 3 crash at Macau in 2018, Alexander Peroni’s Formula 3 crash at Monza in 2019, or the death of Anthoine Hubert at Spa in 2019.  Floersch and Peroni both suffered a broken vertebra, but both healed and are racing again.  Grosjean was already leaving F1 after this season (no team signed him for 2021), and so this was a premature exit for him.  Whether he retires or goes to another racing series remains to be seen.

I won’t post the videos of Grosjean’s crash, but here are links to view them if you choose.

Video of the destroyed armco barrier

The Race’s in depth analysis of the crash

Autosport.com’s analysis of the crash

In the early days of Formula 1 and other racing (post-World War II), safety was an afterthought.  It took Jackie Stewart’s campaigning 1960s to institute and mandate safety standards for cars and tracks.  But until the death of Ayrton Senna in 1994, new safety measures were always a reaction (or Tombstone Technology as some called it) because drivers usually had to die before changes were made.  Since 1994, all sanctioning bodies, series, teams, and scientists in motorsports have been pro-active about safety, trying to anticipate and prevent dangers.  Sometimes those preventative measures create new problems to solve (the raised and hardened nose that nearly killed Alex Zanardi and took away his legs).  But the fact that Formula 1 has averaged one driver death per decade since the 1990s versus one per year in the 1960s says how far safety has come.

On the downside, Formula 3 driver Alessio Deledda is in deep sheep after his antics on public roads in Italy.  He recorded and posted videos of himself driving over 300kmh on public roads.

Holding his phone in one hand, the wheel with the other.

Needless to say, this hasn’t gone over well.  The FIA advocates for public road safety, and has the authority to revoke Deladda’s racing license, which would deny him the privilege to race.  He might be forced to obtain a license from a sanctioning body with lower safety standards (e.g. the US’s SCCA).  The restrictions and permissions for racing licenses are far stricter than for commercial road licenses, on par with pilot’s licenses (e.g. people with epilepsy are barred from racing).  While this link is solely for motor racing in the UK, the list of medical exclusions in part 10 are fairly standard worldwide.

The running gag since Deladda’s stupidity became news is, “This is the fastest Deladda has driven all year!”  Considering his finishing positions in the Formula 3 championship over the last two years (16th in one race, 20th or lower in all others), there’s some truth to that.  His career would likely have ended soon, even if his license weren’t revoked.  He’s just not very good.