Since 2003, Taipei has held an annual pride parade on the last Saturday in October.  In the past three years, the turnout was over 130,000 but that included foreign travellers from nearby countries, some of whom can’t live openly for fear of being murdered, never mind hold parades: Indonesia, Malaysia, Philippines, Thailand, South Korea, Japan, and elsewhere.  Various people and news have said this would likely be the world’s largest LGBTQIA gathering in 2020.

Taiwan to host LGBT+ Pride parade despite coronavirus pandemic, making it the largest queer gathering in 2020

As the coronavirus rages on elsewhere, Taiwan is set to go ahead with its LGBT+ Pride parade in what organisers believe will likely be the largest queer event held in 2020.

Now in its 18th year, the country’s Pride parade will see the streets of Taipei heave with the colours of the rainbow on 31 October.

Every last Saturday in October, the capital hosts the largest annual Pride parade in Asia. It normally welcomes an estimated 80,000 people each year, but organisers are expecting a lesser turnout due to the pandemic, according to Taiwan News.

While the coronavirus has made large gatherings unthinkable in many countries, Taiwan has almost remained impervious. The self-governing island has vastly contained its caseloads, enabling processions such as an LGBT+ Pride parade to go ahead with only minor restrictions.

As a result, organisers explained that they believe Taiwan LGBT+ Pride will likely be the largest queer gathering of any kind held this year after many Pride events were cancelled or digitalised.

Obviously, there were zero foreign travellers this year.  I was expecting a lower turnout of around 80,000 in part because of COVID-19 and the government’s requirement that all attendees register and give personal data (i.e. phone number, recent travel and health history).

I am glad to be wrong.

Lower turnout was expected for this year’s pride parade compared to last year, due to the ongoing COVID-19 pandemic. The pride parade last October, the first pride parade to take place since the legalization of gay marriage in May 2019, saw a record turnout of 200,000 participants, seeing attendance nearly doubling since 130,000 turnout in 2018.

Taiwan’s pride parade is generally known as one of the earliest and largest pride parades in Asia, attracting a number of international visitors annually. However, travel from other countries is currently limited due to the ongoing COVID-19 pandemic. Despite this, with Taiwan having avoided the expansive lockdowns that the rest of the world has undergone, the pride parade this year is one of the few, if not the only full-scale pride parade able to take place currently. Taiwan recently marked 200 days since its last case of domestic transmission of COVID-19. And if the turnout was, in fact, 130,000 participants, turnout was comparable to 2018, reflecting that domestic participation in the pride parade has increased.

Let your freak flag fly.  That’s a better song than the stuff they were blasting at the parade.

A few pictures of the event are below the fold.  There are more on my facebook page.

Now please excuse me, I have to get dressed for Saturday night’s Hallowe’en party, my second night out on the trot.

With a friend of mine.  She’s French. 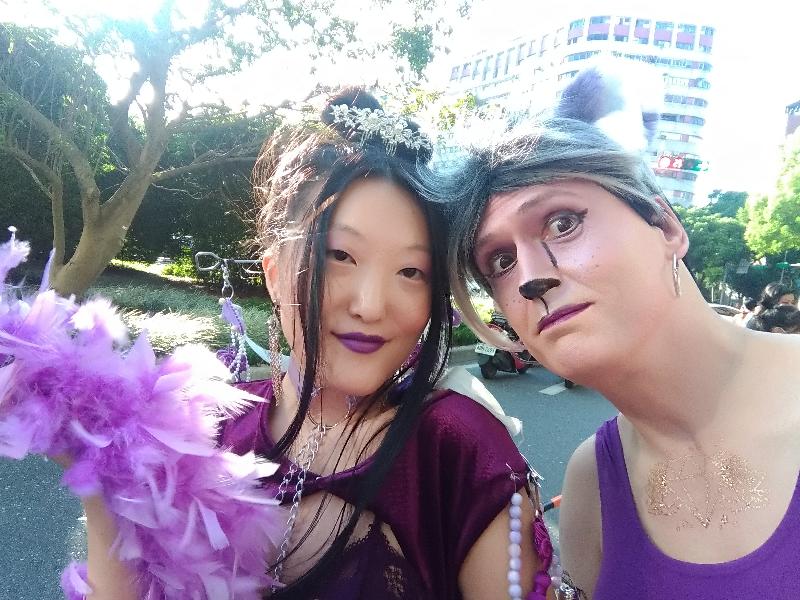 The music performances began around sundown. 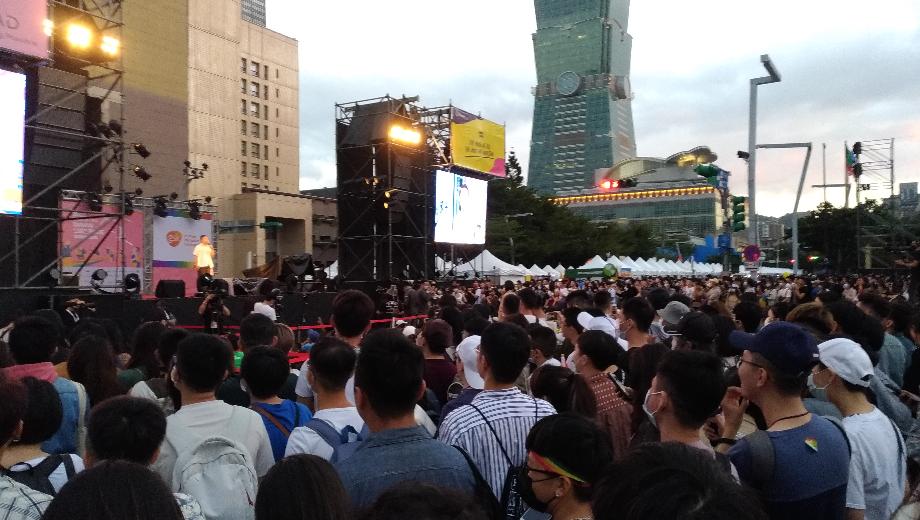 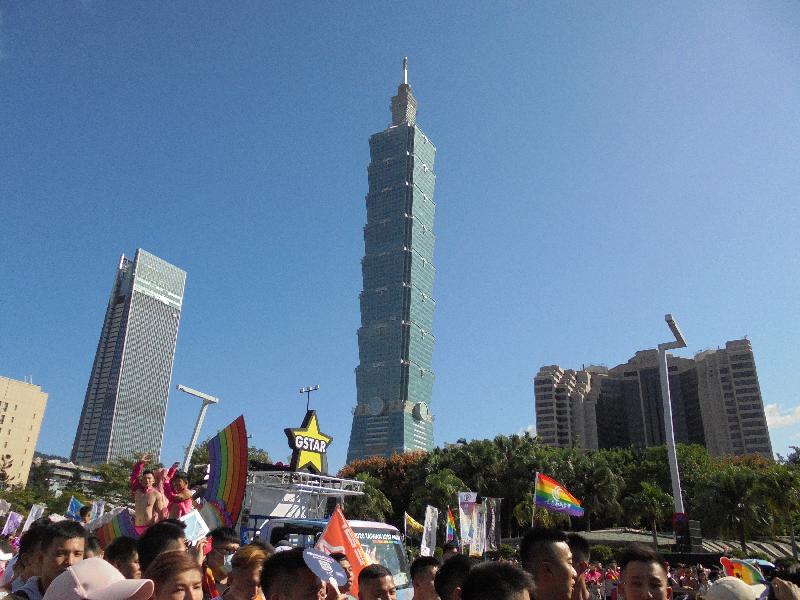 Facing west, going down Ren’ai road.  It was a much better route this year, better protection for the participants and easier foot travel. 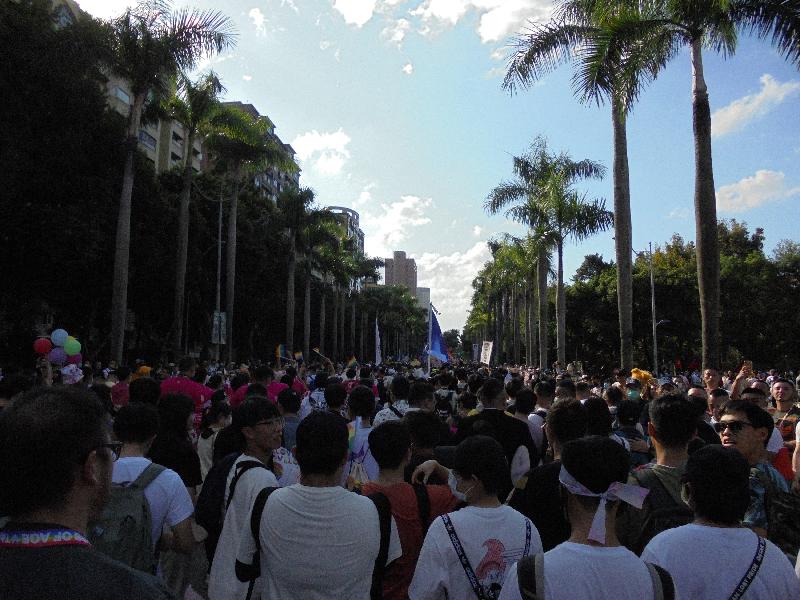 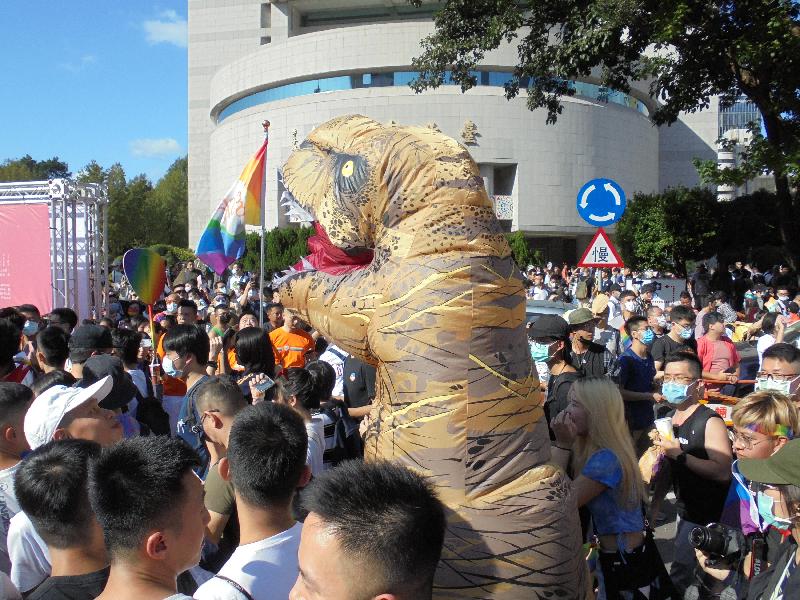 These were far from the only freak flag types.  I chose this pic because they were masked, not like the girl in chains and shibari. 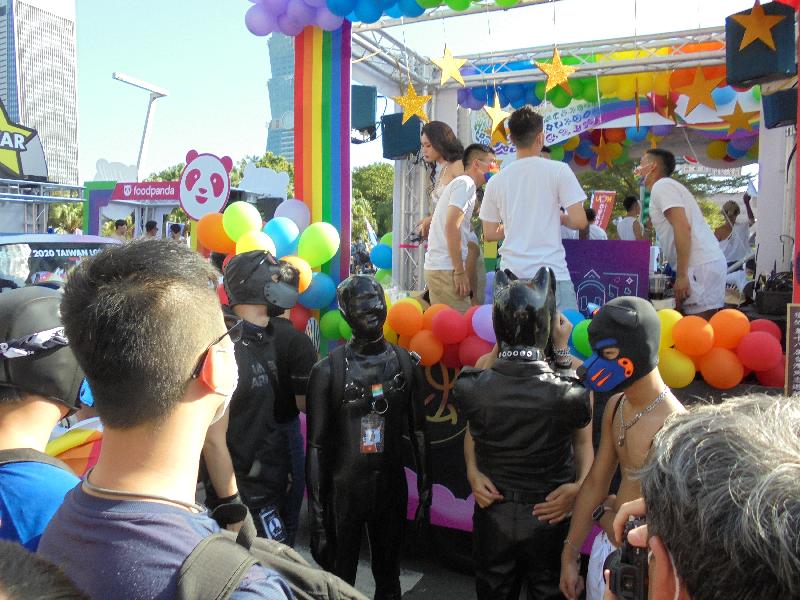 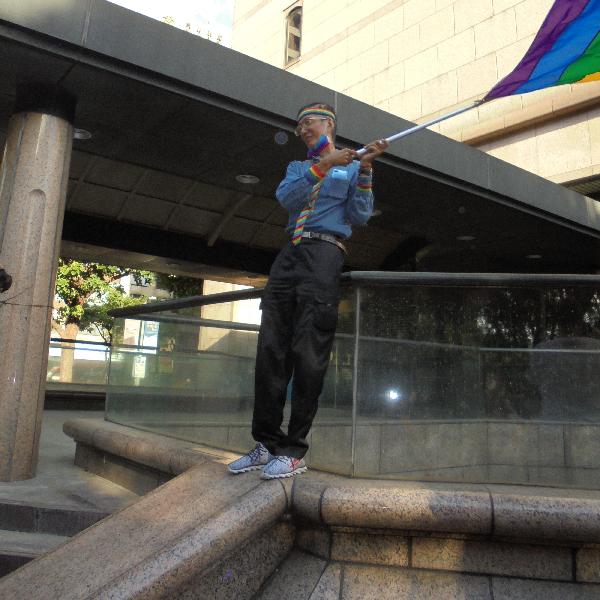 Watching A Car Crash: Foreign journalists talk about the US » « Hissy Fit: When hate groups don’t get their way