Remember the Wenzhou High Speed Rail crash from July 2011, when slipshod construction led to the deaths of 40 passengers?

Chinese authorities face growing public fury over the high-speed train crash that killed at least 38 people and injured 192, with the disposal of wreckage and attempts to control coverage of the incident prompting allegations of a cover-up.

Internet users attacked the government’s response to the disaster after authorities muzzled media coverage and urged reporters to focus on rescue efforts. “We have the right to know the truth!” wrote one microblogger called kangfu xiaodingdang. “That’s our basic right!”

Leaked propaganda directives ordered journalists not to investigate the causes and footage emerged of bulldozers shovelling dirt over carriages.

Hong Kong University’s China Media Project said propaganda authorities have ordered media not to send reporters to the scene, not to report too frequently and not to link the story to high-speed rail development. “There must be no seeking after the causes [of the accident], rather, statements from authoritative departments must be followed,” said one directive. Another ordered: “No calling into doubt, no development [of further issues], no speculation, and no dissemination [of such things] on personal microblogs!”

Remember the melamine contamination and poisoning in 2008 that killed children?  China’s continued use of forced slave labour in prisons?  The continued murder of political prisons for organs to feed the transplant tourist industry?  And recently the coverup of 40,000-150,000 deaths and mishandling of COVID-19?

Corruption and greed have been the backbone of China’s economic nightmare.  It’s just a matter of time before cracks appear in the dam of the mass murdering regime.  And that flood may burst through very soon.  This image of the Three Gorges Dam (TGD, on the Yangtze River) is from the Daily Mail UK (aka Daily Fail): 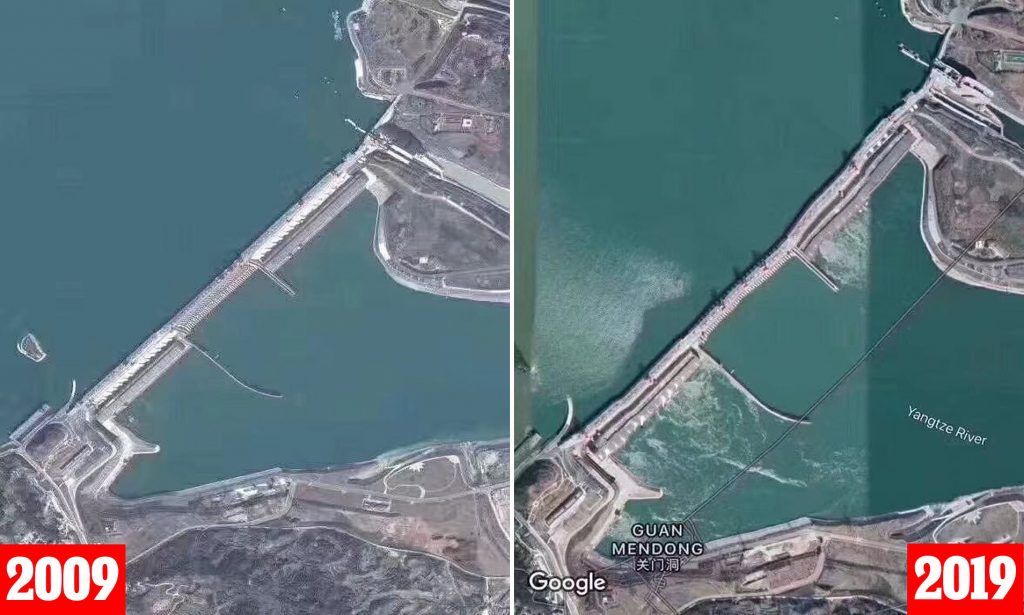 The picture from 2019 shows several cases of warping in the TGD.  China claims this is due to “distorted satellite photos”.  They can argue that, but they can’t argue away the flooding and rain that their state-controlled media are reporting in June 2020.  The BBC is reporting the same thing.

Safety experts with the government-run China Three Gorges Corporation said on its official website that the Yangtze River dam had moved a few millimetres due to temperature and water level changes, but safety indicators remained well within their normal range.

They were responding to a Twitter user who posted satellite photos from Google Maps last week purporting to show the dam had bent and was at risk of breaking. The photos were circulated on domestic social media, sparking concerns over its structural integrity.

China has been inundated with rain this spring and now summer, and the Yangtze River has been overflowing.   The metropolis of Chongqing (pop. 30 million) has been flooded, and the regime, while still denying any problems, has begun evacuating people downriver from the dam.  If the dam breaks, the cities at risk include Jingzhou, Yueyang, Wuhan, Jiujiang, Nanjing, and several others.  That’s another thirty million people in the largest cities, plus others that line the river.

It would be an inland tsunami.  The regime continues to deny the danger, but even their own mouthpieces are warning people about flood waters.

News media in other countries report that the company which built the dam did its own inspection, that it was not approved by independent people.  Foreign engineers have inspected questioned its construction, and even hydrologist Wang Weiluo (王維洛, a PRC citizen) openly doubts its integrity.

The TGD is one of China’s (and the world’s) largest sources of electric power, producing 22,500 megawatts of power.  If it collapses, it could have catastrophic effects not just environmentally but also politically and economically.  China won’t just have to clean up the mess of flooded cities and lost lives, it will have to it without power.

Humanists Report: Freethinkers at risk in 2020 » « Still To Come: What I did on Sunday