It’s easy to go very wrong when writing about racism, so I’ll keep it to a miminalist (See what I did there?) and link to news and other items.  I’ll leave the evaluation to you.

Tedros Adhominem (as I like to call him) has accused Taiwan of racism, as if the democratically elected government were responsible for the acts of individuals.  Noticeably, the posts criticizing Tedros are individually written and unique, not copied and pasted like the People’s Keyboard Army in China.

Also of interest, my friend who writes Lao Ren Cha (she reads and writes Traditional Mandarin fluently) notes that some of the racist attacks against Tedros were written in Simplified Chinese, which is only used in the PRC.  Taiwanese people learn Traditional Mandarin.

Multiple news reports and video from China (links found below the fold) have shown citizens from various African countries with legal PRC residency visas (students and business people) living in Guangzhou are being evicted from their homes and arrested by police.  Beijing claims not to be directing it.

Thus far, Tedros has been completely silent on the arrests.

This meme appeared in a Taiwan facebook group today: 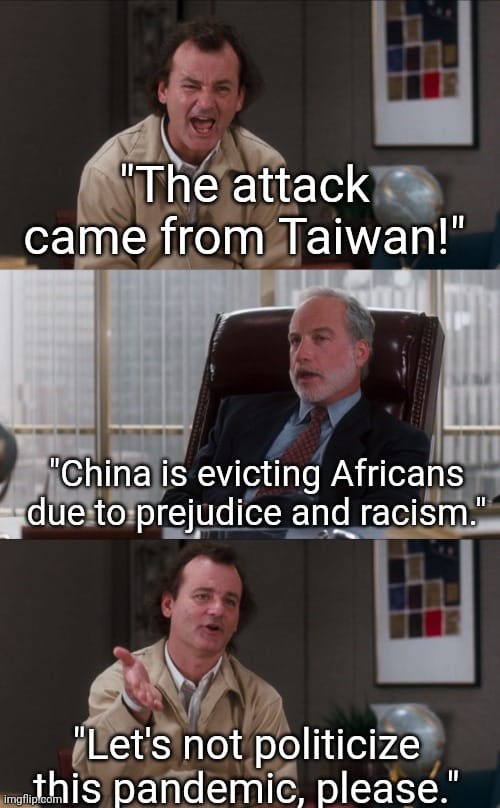 From Reuters, the scare quotes are theirs:

African ambassadors in China complain to government over ‘discrimination’

JOHANNESBURG (Reuters) – African ambassadors in China have written to the country’s foreign minister over what they call discrimination against Africans as the country seeks to prevent a resurgence of the coronavirus.

In recent days Africans in Guangzhou have reported being ejected from their apartments by their landlords, being tested for coronavirus several times without being given results and being shunned and discriminated against in public. Such complaints have been made in local media, and on social media.

The ambassadors’ note said such “stigmatisation and discrimination” created the false impression that the virus was being spread by Africans.

“The Group of African Ambassadors in Beijing immediately demands the cessation of forceful testing, quarantine and other inhuman treatments meted out to Africans,” it said.

From CNN (this time, the emphasis is mine):

Africans in Guangzhou are on edge, after many are left homeless amid rising xenophobia as China fights a second wave of coronavirus

Hong Kong (CNN) The African community in Guangzhou is on edge after widespread accounts were shared on social media of people being left homeless this week, as China’s warnings against imported coronavirus cases stoke anti-foreigner sentiment.

In the southern Chinese city, Africans have been evicted from their homes by landlords and turned away from hotels, despite many claiming to have no recent travel history or known contact with Covid-19 patients.

CNN interviewed more than two dozen Africans living in Guangzhou many of whom told of the same experiences: being left without a home, being subject to random testing for Covid-19, and being quarantined for 14 days in their homes, despite having no symptoms or contact with known patients.
Health authorities in Guangdong ​province and the Guangzhou Public Security Bureau did not respond to CNN’s request for comment.

“I would like to emphasize that the Chinese government treats all foreigners in China equally, opposes any differentiated practices targeted at specific groups of people, and has zero tolerance for discriminatory words and actions.”

This is only happening to citizens from African countries.  I can not find any articles of this happening to other foreign residents within China (other than journalists, of course).

Twitter user Freddie1999 posted video of a man being arrested in Guangzhou: