Today, in one of his most inept, clueless and contradictory posts on twitter,

Dishonest D’souza equated environmental activist and all-round wonderful human being Greta Thunberg as a nazi.  Literally, a nazi, because of her appearance, and by extension he’s inferring that all environmentalists and climate change protesters are nazis. 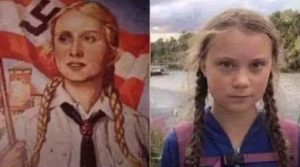 This isn’t just Godwin, it’s god-lose. Even for Dishonest, inciting hate against a child is a low blow.  Given Jack Dorsey’s history of “free speech until I disagree with you or it costs me money”, it’s unlikely that D’souza’s account will be removed.

D’souza must be starved for attention because he doesn’t block those who disagree with him.  The criticism and takedowns of his latest blunder are strong and accurate.

Squeezed Between: Why South Korea’s LGBTQIA movement lags behind » « It’s Time To Vote: The next Canadian federal election is on October 21