Below is a picture of myself with Chi Chia-wei, the Taiwanese citizen most responsible for marriage equality and the push for LGBTQIA rights.  This photo was taken at the Taichung Pride Parade, November 2018.

“This is the right that we deserved from a long time ago, as a beacon in Asia, I hope Taiwan’s democracy and human rights could have a ripple effect on other countries in Asia.”

– Chi Chia-wei, May 2019, after marriage equality was guaranteed

In 1986, while the fascist government was still in control, Chi came out as gay on national TV, unheard of and shocking at the time.  Chi was falsely convicted of a crime to silence him.  He spent only 162 days in prison, released by a judge who admitted the conviction was wrong.  (Quartz article, February 2017)

“I wake up every day and I tell myself, ‘Today I’m not going to have success, but I’ll have it tomorrow,’ so that every day I have hope.” 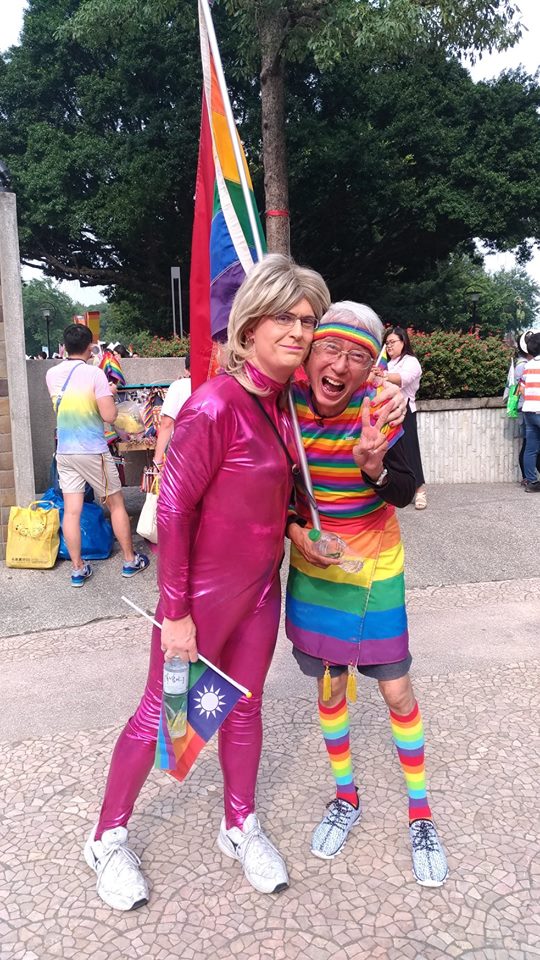 This Gay Taiwanese Activist Fought for Marriage Equality for 30 Years (and Won!)

Despite the government persecuting and imprisoning Chi for advocating for LGBTQ rights, he claimed that his sexuality was rarely an issue for those around him. He served a two-year stint in Taiwan’s armed forces—as military service is mandatory in Taiwan—without once being harassed or bullied. Chi recalled an incident years after in which an anonymous caller telephoned his work to inform his manager that he’s gay, hoping to get him fired. Upon receiving the call, his manager shouted into the phone, “You’re the last one in the world to know!” and slammed down the receiver.

“Everyone the office asked, ‘What was that? Who was that?’” Chi remembers. “My manager said that someone called to say that I was gay. Everyone laughed because they already knew.”

But even as he characterized the Taiwanese people as historically tolerant—and maybe a little bit indifferent—toward LGBTQ people, Chi said he has witnessed a radical transformation in the 33 years he’s been fighting for same-sex marriage. In the 1980s, he was the only visibly LGBTQ person on the island; no one else would talk about it. By the ’90s, he said there were “hundreds” of organizations working for equal rights, including associations for LGBTQ doctors and LGBTQ teachers. A 2018 concert held in favor of marriage equality brought hundreds of thousands to Taipei, a crowd that would have been unthinkable at the time of his coming out.

The couple’s marriage was officiated by Taiwanese LGBTQ activist Chi Chia-wei, who wore a red coat and a rainbow headband and used the pen that President Tsai Ing-wen used to sign the marriage equality law earlier this week.

I Wish: What if lacrosse had become the biggest sport? » « History Lessened: Why Hong Kong protesters called PRC the White Terror