Aged Reasoner is another Nick Lowe fan.  But since he didn’t mention this, I will:

Nick Lowe was born on March 26, 1949, turning 70 years old this year. His career as a recording artist spans five decades and many musical genres, with many hit songs and yet most couldn’t name him. The New York Times said in 2011, “The 40-year career of the English singer-songwriter Nick Lowe constitutes a paradox: the songs he has written are better known than he is.” Look below the fold for a selection of songs and stories about him.

Lowe first recorded with Brinley Schwarz in the 1970s before linking up with guitarists Dave Edmunds and Billy Bremner and drummer Terry Williams. After Rockpile ended, Lowe performed solo until forming Little Village (one of the “supergroups” of the late 1980s and early 1990s) with David Lindley, Ry Cooder and Jim Keltner. What a list of talent.

Lowe earned the nickname “Basher” for his work as a record producer, his oft repeated quote, “Bash it out now, let’s tart it up later.” Lowe produced Elvis Costello’s first five albums, as well as The Damned’s debut album (“Damned Damned Damned”), The Pretenders’s first single “Stop Your Sobbing”, Graham Parker’s “Howlin’ Wind”, and many others.

And then there’s Lowe’s songwriting to consider, writing classics such as “(What’s So Funny ‘Bout) Peace, Love, and Understanding”, one of Elvis Costello’s biggest hits, and “The Beast In Me” for his father in law, Johnny Cash on his 1994 “American Recordings” album. Lowe’s own recordings and success is numerous, if largely without his name (e.g. “So It Goes”, Stiff Records’s first ever single, “Cruel To Be Kind”, “Teacher Teacher”, “I Knew The Bride When She Used to Rock And Roll”, and many others).

Last November, Rolling Stone did a surprisingly flattering piece on Lowe and his career.

Lowe possesses a talent, common among a certain strain of middle-class Brits, of marrying congenital self-effacement with supreme confidence, with neither personality trait ever quite overriding the other. He’s a natural-born raconteur, and he knows it, which allows him to launch without fear into meandering and digressive 25-minute anecdotes that inevitably pay off in spectacular fashion. And yet at the same time, most of these stories deliberately humble Lowe, wind up making him the butt of a joke. Take his origin story as a musician. It begins with Lowe being sent to boarding school in Suffolk, England, where, in 1963, he formed a band with his classmate Brinsley Schwarz. When Lowe volunteered to play bass, a friend from woodworking class built him one that had to be tuned with a pair of pliers. The band didn’t last. Lowe, upon graduating, had dreams of becoming a war correspondent, inspired by the hard-living men who would come to the base to talk to his father, but after landing an unsexy entry-level job at a suburban newspaper, he realized he couldn’t cut it — sent to review The Love Bug, Lowe got drunk and passed out during the screening — and instead reconnected with Schwarz, who by that point had signed a record deal with his new Sixties-pop band, Kippington Lodge. Lowe joined, insisting they ditch the session musicians who had been backing them in the studio: “I said, ‘This has got to go, boys! We’ve got to play on our own records. What kind of band are we?’ ” They turned out to be a band that sounded terrible without session musicians, and was soon dropped by the label.

The 40-year career of the English singer-songwriter Nick Lowe constitutes a paradox: the songs he has written are better known than he is. He cheerfully acknowledges that many people think that Elvis Costello is the author of the Lowe song “(What’s So Funny ’Bout) Peace, Love and Understanding” and that the Johnny Cash version of “The Beast in Me” has come to overshadow his own, which was used on the soundtrack of the HBO series “The Sopranos.”

But at a stage in life when many of his peers are content to live off past glories, Mr. Lowe, now 62, is enjoying a remarkable second wind. Originally a purveyor of witty subversions of Top 40 confections — his first United States solo album, released in 1978, was called “Pure Pop for Now People” — he has reinvented himself in recent years as a writer and performer of spare, reflective songs rooted in the American country music and rhythm ’n’ blues he imbibed as a child.

An AP item on Lowe in 2018.  It’s like the Steve Miller Band backing Chuck Berry in the late 1960s, but without the tension:

The British composer of “Cruel to Be Kind” and ”(What’s So Funny ’Bout) Peace, Love and Understanding” was deep into the country squire phase of his career a few years back, performing mostly acoustically. The death of drummer Bobby Irwin took an emotional toll on Lowe, leading to the dissolution of his band.

He’s 69 years old now, the shock of hair completely white. He can still write meticulously-crafted pop songs and perform them with sweetness and subtlety. Yet as the years went by, it became easier to forget Lowe’s nickname was once “the basher” for tear-down-the-house rock shows (some alcohol required) and a get-it-done-quickly recording style.

The Nashville-based quartet is a rarity, an instrumental rock band who recall the Ventures and Raybeats, and perform onstage in matching suits and unmatching masks. Your first instinct is to laugh, until the power and personality of the music takes over.

They also share Lowe’s record company and manager, who suggested they get together when the singer needed a band for a tour supporting a holiday album. A more enduring partnership was forged.

“Like everybody else, I couldn’t believe it when they put on their masks and changed into suits,” Lowe said. “But now I’m totally used to it. The way we play together now, it actually feels like I’m in the band.” 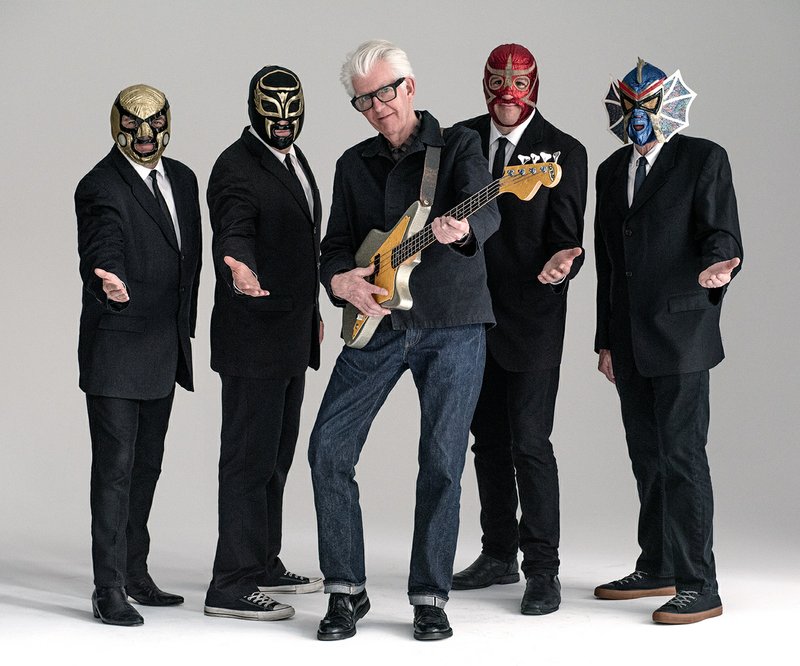 Here’s a selection of music from Nick Lowe’s career.

Elvis Costello, “What’s So Funny About Peace, Love, And Understanding”

Elvis Costello, “Pump It Up”

The Pretenders, “Stop Your Sobbing”

Paul Carrack, “I Need You”

Rockpile, “When I Write The Book”

Nick Lowe, “Cruel To Be Kind”, Lowe’s most famous song under his own name

Nick Lowe, “Half A Boy And Half A Man”

Nick Lowe, “The Rose Of England”

Nick Lowe, “I Knew The Bride (When She Used To Rock And Roll)”

Nick Lowe, “She Don’t Love Nobody”

(No, your ears don’t deceive you. Huey Lewis and the News are the backing band on “I Knew The Bride”.)

Nick Lowe, “All Men Are Liars” – this song is fantastic for annoying MRAs

Nick Lowe, “House For Sale” – this song shows how musicians should age with dignity

Nick Lowe, “Checkout Time”, a song contemplating his own mortality in his 60s

Nick Lowe, “The Beast In Me”

Sneak Preview: Coming soon, to a theatre of war near me? » « A Perv’s Aide Pervades: Randy Andy and the Madam