In 1983, Tandy produced the first widely used laptop computer, the Model 100.  The Epson HX-20 preceded it by two years, and luggable computers by a year, but the Model 100 was first lightweight portable (3.5 pounds) that was suitable for more than just data collection.  It was later followed by the superior Model 102 and finally the less liked Model 200. The series sold roughly six million units, one of the biggest selling computers, ever. 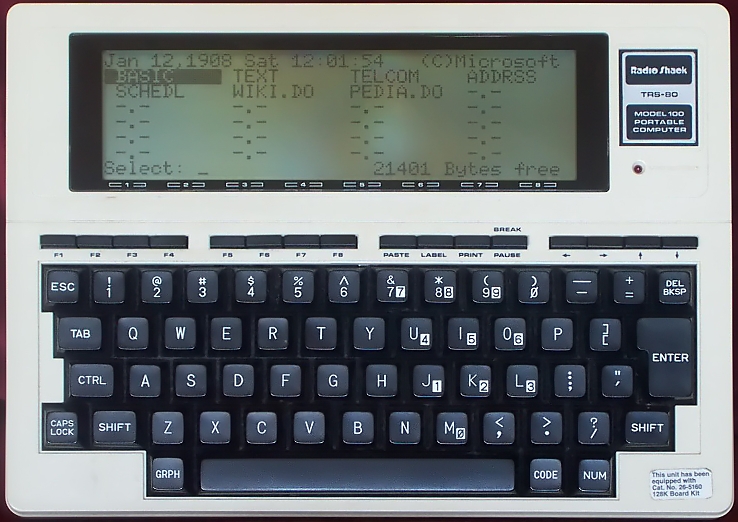 There is more below the fold.

(Before we continue: Yes, I know it was manufactured by Kyocera and both NEC and Olivetti distributed it.  But Tandy’s version had the most functionality and RAM of the four versions, hence its focus.)

The Model 100 had (for its time) a large LCD screen of five lines by forty characters, allowing sufficient viewing space for editing. The computer had several built-in applications: a Basic interpreter, a text editor, an address book, a scheduler, and most importantly, a telecommunications program. It had two other aces up its sleeve: incredibly long battery life (up to twenty hours on four AA batteries) and RAM that could retain memory even when shut off or the batteries were removed thanks to a NiCad backup battery. This was twenty years before flash memory storage became commonplace.

Tandy intended and marketed the Model 100 to business people, but instead it found its niche in journalism. For decades (1900s-1980s), reporters travelled with 5-10kg “portable” typewriters, typed out their stories, then called their newspapers by phone and read the story to a copyist who had to be fast and accurate. But the Model 100 allowed reporters to connect their machine to a telephone via couplers. They could edit without paper, then (depending on the phone line quality) quickly and perfectly transmit their stories as binary data, even while around the world.

The computer remained in wide use until well into the 1990s when laptop computers shrunk and email came into common use. I always wanted one, but with a prohibitive price tag (US$1300 in 1983) it was out of my reach. The Model 100 also holds a place in history as the last computer for which Bill Gates personally wrote code for the machine.

Some links and stories about the computer:

The Guardian’s Special Writer Maev Kennedy has been a journalist for over thirty years.  In an interview she was reintroduced to her Model 100 and spoke about it like an old friend.  (From “The Guardian’s First Laptop“.)

PC World profiled the Model 100 in 2008 rank it as one of the ten most important laptops of all time.

Here is a Model 100 with some of its original accessories: an acoustic coupler for the modem and bar code reader.  Those were available at Radio Shack stores in the 1980s.  I am uncertain about the provenance of the floppy disk drive. 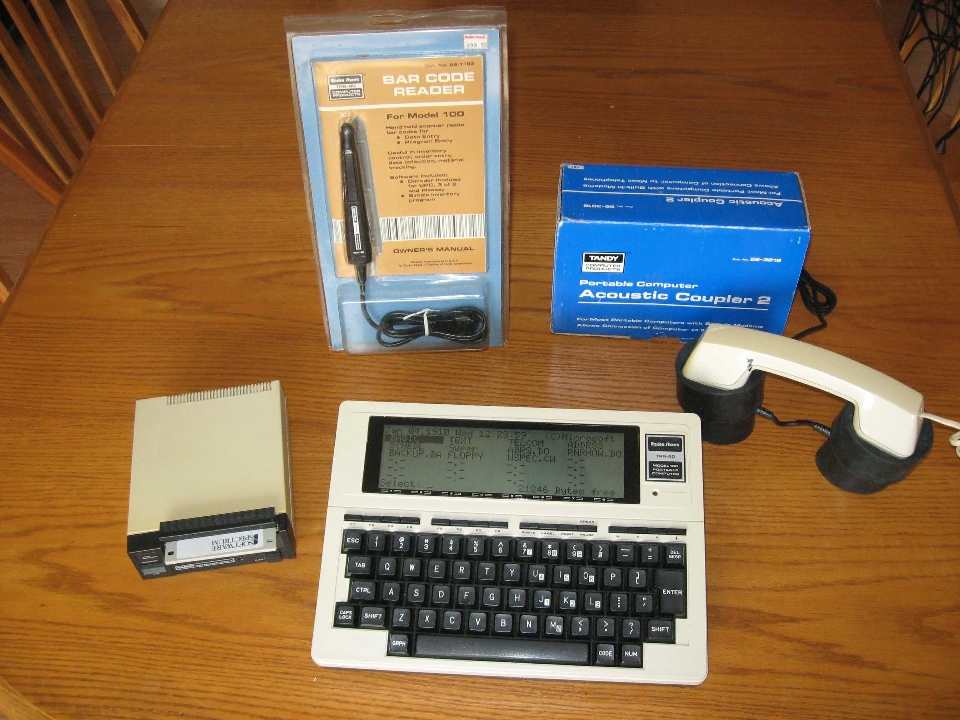